This week’s episode opens at The Vale where we finally see Daemon’s lawful wedded wife, Lady Rhea. Unfortunately for the Lady of Runestone, her screen time is as brief as her mentions throughout this season.

After rejecting the company of her cousin Gerald, she goes hunting alone and crosses paths with Daemon, who quickly ends her.

Back in King’s Landing, Otto reminds Alicent that the realm will reject Rhaenyra, leaving her no choice but to cut out Alicent’s children to secure her claim to the Throne. 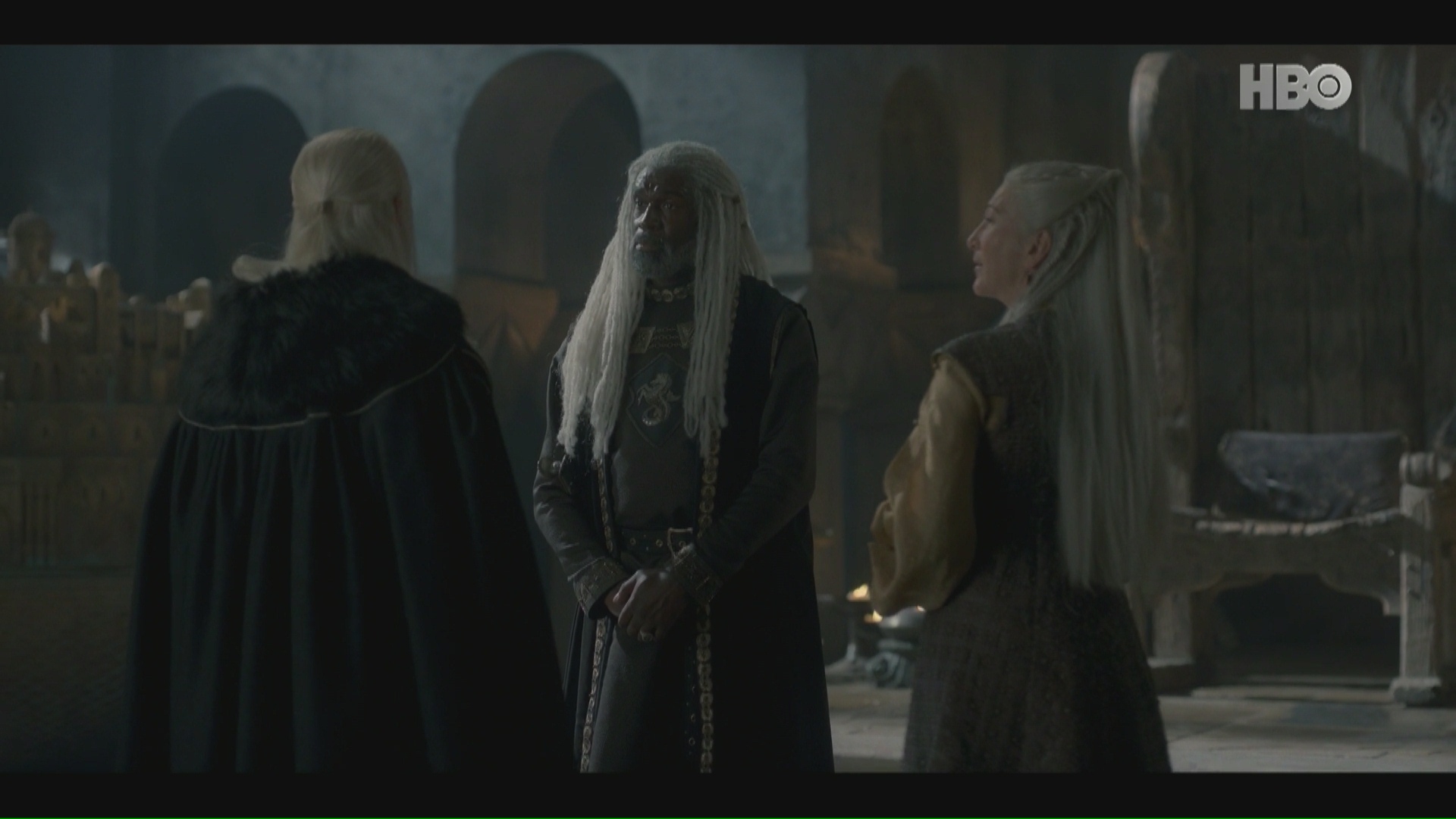 Viserys speaking to Lord Corlys and Rhaenys Targaryen at Driftmark

Meanwhile, Viserys sails towards Driftmark to pay Lord Corlys a visit. Visibly ill, he lays out a proposal for the Velaryons: allow Rhaenyra and Ser Laenor to wed and their firstborn child, regardless of gender, will inherit the Iron Throne.

We like how Viserys reaches a compromise to strengthen the Crown while keeping the Targaryen prophecy in check. He clarifies that though the child will bear their father’s name, Velaryon, when the time comes to ascend the Iron Throne, they will bear the Targaryen name. 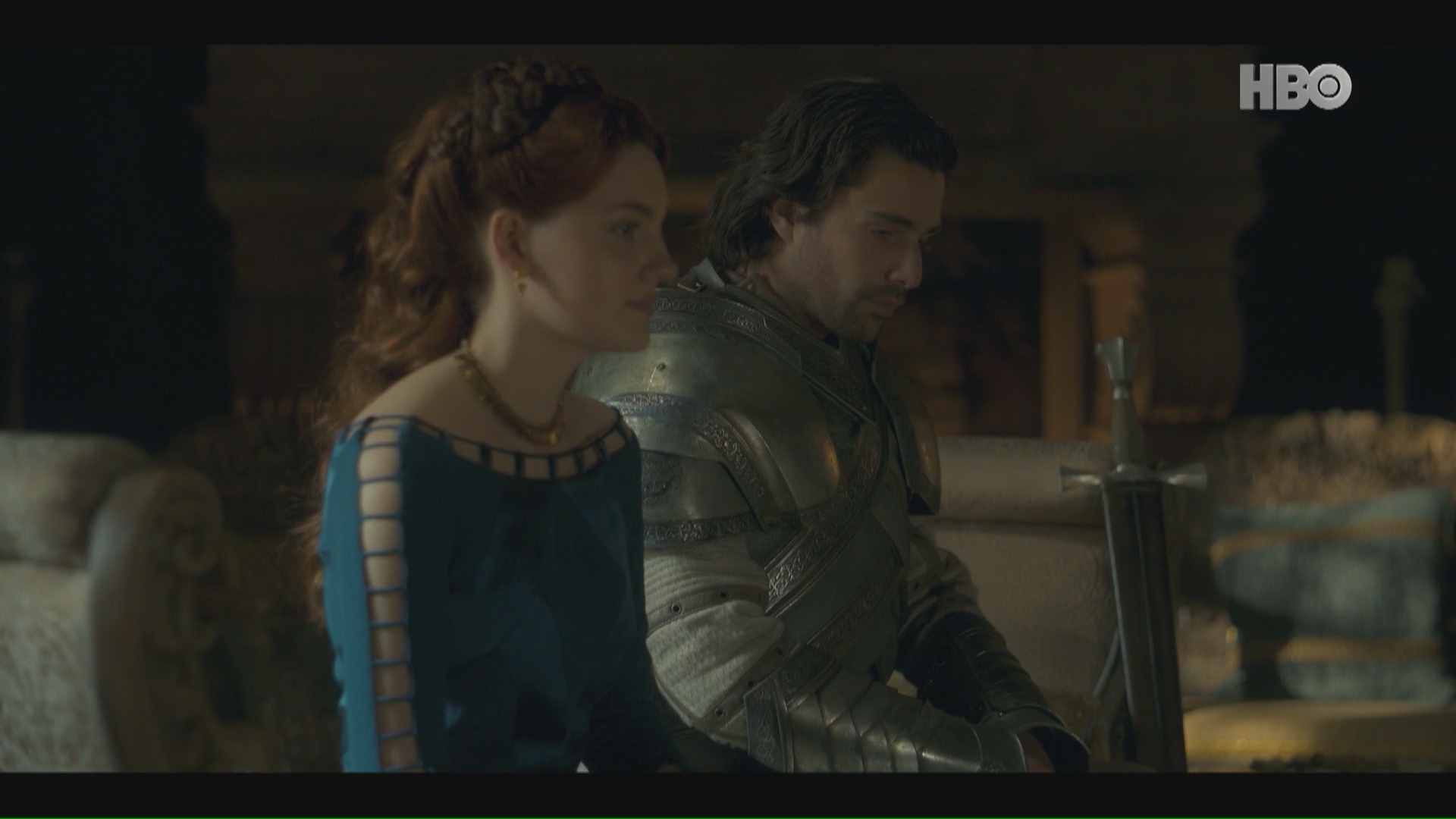 We then see themes of duty versus desire play out as Rhaenyra and Ser Laenor take a stroll along the coastlines. They come to an agreement that though they are not in love, they will do their duty to produce an heir.

Contrasting this is the conversation between Rhaenyra and Ser Criston as they sail back to King’s Landing. Ser Criston invites Rhaenyra to elope with him to Essos, which Rhaenyra swiftly turns down in favour of her duty to the Iron Throne.

Before Ser Criston can catch a break, we see him being summoned to the Queen’s chambers. The cat’s out of the bag it seems, as Alicent alludes to knowing the truth behind Rhaenyra’s maidenhood. Though she did not point to any names, Ser Criston confesses to bedding Rhaenyra. Alicent dismisses him. Next we come to the royal wedding banquet. Guests fill the throne room and so do side-eyes. Tension fills the air as the Velaryons, Daemon and the Queen make their dramatic entrances.

After Viserys finishes his speech, we are treated to a dance. But not all is merry as Joffrey Lonmouth, Ser Laenor’s boyfriend, confronts Ser Criston about their mutual secret. Moments later Daemon starts making a move on Rhaenyra, which causes both Ser Criston and Joffrey to intervene. The scuffle ends in a brawl. Joffrey lays motionless with blood on Ser Criston’s hands.

The episode closes with a private wedding ceremony that’s not all smiles and cheers. At this point, Ser Criston attempts to take his own life before Alicent stops him.

We find it interesting how the series is building up to an epic climax, sowing the seeds of tension between houses. How the impending doom of the King is a floodgate of war waiting to be opened. We can’t wait to see how the Targaryen-Velaryon relationship unfolds in the next episode!

Catch House of The Dragon on demand on Astro with new episodes every Monday, or watch it on the same day at 10.00pm on HBO CH411. Open to all Astro Movie Pack customers.