The video has since gone viral.

RD Minion
Yes, monkeys may look cute, but here's a piece of advice: try not to get too close to them because you'll never know just how devious they are.

This one Malaysian woman, unfortunately, didn't get the memo.

A short video clip showing a cheeky monkey snatching a woman's handbag and then proceeded to throw her money from a tree has gone viral on social media.

The hilarious clip was shared by TikTok user @ansazmii, real name Anis Farhana Nor Azmi, over the weekend.

Anis told mStar that the incident happened at the Teluk Batik beach in Lumut where she and her friends threw a picnic. As they were setting up, the monkey approached Anis and started rummaging through their belongings.

“Other monkeys were just looking from afar, but this one monkey caused panic after it approached us and went straight for my handbag," Anis told the Malay news portal.

The group shouted at the monkey, but instead of running away, the simian snatched Anis' handbag and made a beeline for the nearest tree. 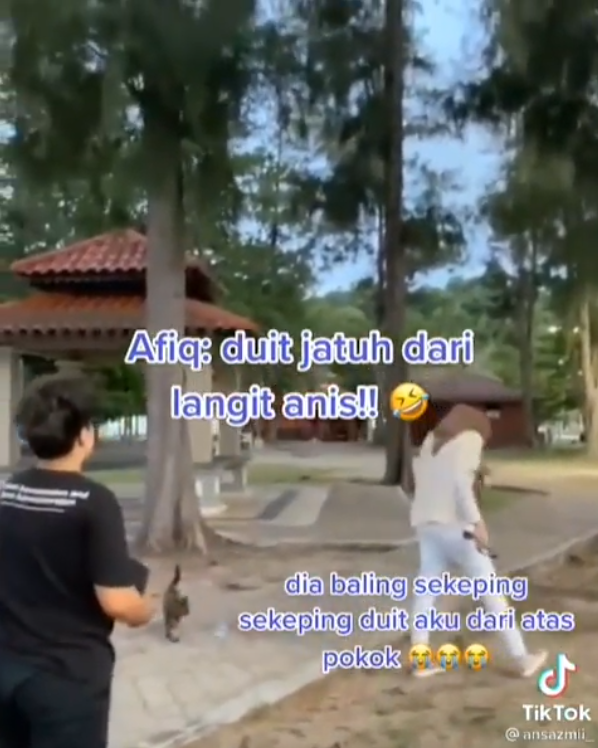 And if that wasn't enough, the cheeky fella then started throwing away bank notes from Anis' wallet while being perched on top of the tree.

As a result, a total of RM26 worth of bank notes were strewn everywhere, and Anis and her friends even had to shake the tree to dislodge some of the bank notes that were stuck on the branches.

Thankfully for Anis, the monkey decided that he had no use for the handbag and decided to return it to poor Anis in the end.

"After an hour of shouting to scare the monkey, it finally dropped my wallet and my handbag.

“Fortunately, my important documents such as bank cards, identification cards were all intact in the wallet," she told mStar.

After retrieving her personal belongings, the group decided to move to another spot on the beach, which was probably a good call.