Much like its existence in the market, most people forgot about the all-new Hyundai Santa Fe following its preview at the 2018 Kuala Lumpur International Motor Show. Hyundai Sime-Darby Motors didn’t help the cause by taking half a year to introduce the seven-seater for sale.

You’d be forgiven for letting it slip your mind though. As the rise of SUVs dilutes our taste buds towards traditional sedans, it’s always the Japanese that first come to mind. Think of it as middle-child syndrome; oft forgotten but always ends up being independent. 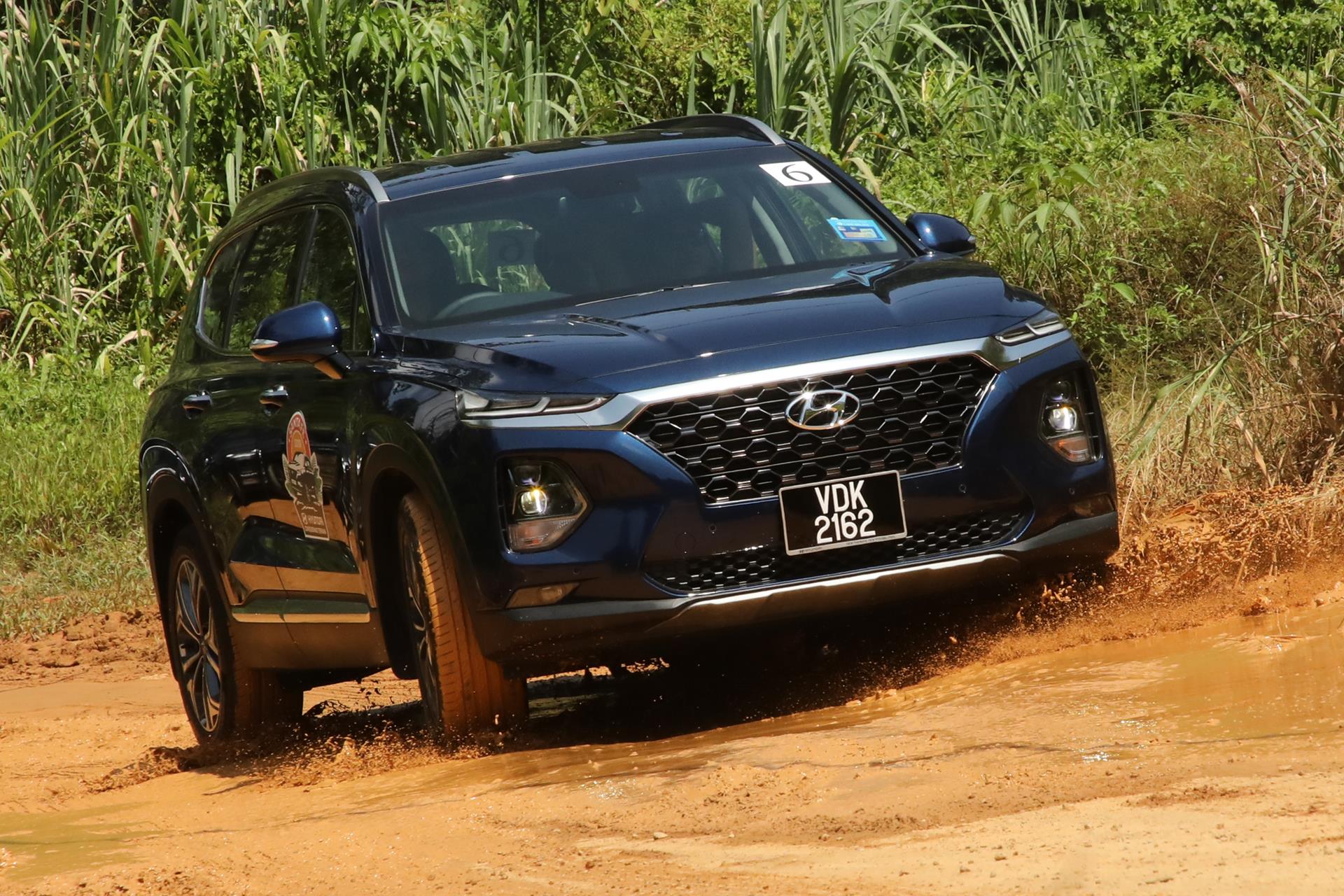 However, we stress the seven-seater layout because that positions it amongst some very select peers in the SUV segment and Hyundai is seemingly confident it’ll do well as they’ve opted to make available four trims over two engine options and based on our day sampling both, you’d best at the very least take it into consideration and not forget it if you’re shopping for a seven-seater.

Even the engines are distinct enough to have them both carve a niche of their own with the corresponding drivetrain. A 2.4-litre petrol brings 170hp and 225Nm of torque to the front wheels with a six-speed automatic in between. Like most unibody SUVs, this will be the default choice for urban commuters that traverse nothing more challenging than supermarket parking lot bumps.

If you need a little grunt, the 2.2-litre turbodiesel can only be had with four-wheel drive and an eight-speed automatic. It brings 190hp and 440Nm of torque. This fourth-generation Santa Fe is visibly larger than its predecessor because it obviously is. If you’re thinking it reminds you of the Kia Sorento, you’d be right. Both are closely related and occupy a segment untapped by the Japs.

One thing Hyundai does well is its unmistakable design language. One look and you know it’s a Hyundai though. That split headlight design and signature cascading front grille is a face you never forget and for something that you barely remembered, first impressions don’t get better than that. For a SUV, it’s a looker and definitely brings a bit of aggression to the table. The tail end though wasn’t written from the same paper but that parchment is on the eyes as well. It lacks the aggression of the front but too much of that would’ve been overkill.

Now we enter the cabin. Good materials that ooze just enough quality to the touch and are shaped functionally with a good dollop of form. It doesn’t feel cramped an you’ll settle in comfortably without too much tweaking.

Don’t go comparing it to the Mazda CX-5 though. Although the Jap occupies a smaller segment, it has quite visibly sacrificed cabin room for material quality and though some devils might do that deal, Hyundai has managed to find an acceptable balance. The Santa Fe does offer something that modern buyers are prioritising over lush materials and design, Android Auto and Apple CarPlay connectivity.

So what’s the Santa Fe like to drive? Again, it’s faultless but hardly memorable. The petrol has decent grunt on the road and highways but overtaking slower vehicles does require a kick down or two of the six-speeder. Between the duo though, the diesel is the one to get if you can afford to splurge. With tons of torque and a couple of extra ratios, that powerband is infinitely more applicable in a wide spectrum of scenarios from crawling in the urban jungle to overtaking slower traffic on the highway and even overcoming some mild off-roading.

Part of the drive did include a little sojourn into the Kenaboi Eco Tourism Camp in Negeri Sembilan just to prove the off-roading bit. A little nugget of information, Santa Fe roughly translates into “holy faith” in Spanish. And it could’ve only been holy faith that led to what was perhaps the most ambitious media drive for a generic unibody SUV as the front-wheel drive Santa Fes (Santa Fii?) were expected to climb a muddy incline that took almost double digit attempts to clear.

Of course, the diesels with the Hyundai’s Active on-Demand 4WD (HTRAC) system didn’t break a sweat but we doubt anyone with a front-drive unibody SUV would ever think of taking on inclines that extreme. The 4WD system can deploy a max of 20 per cent torque to the rear wheels if there’s slip. Lock the rear differential and the power is spread out better.

On the road; which is where 110 per cent of these SUVs will spend their natural life, the Santa Fe was quiet and had minimal tyre or engine noise intruding into the cabin. The ride is on the firmer side, probably more towards the CX-5 than to say a Honda CR-V, but never to the point that it felt intrusive. Pricing for the Santa Fe is spread out quite a bit, starting at RM170k for the petrol Executive and hitting RM212k for the diesel Premium. That means it does cannibalise Sorento sales a little though the Kia can only be had in a sole flavour so the Hyundai can reach out to a wider demographic.

Then there’s the new threat on the scene; the Mazda CX-8. It does cut the Santa Fe some leeway by starting in the RM200k range, closer to the flagship Santa Fe trim. The Mazda does justify the price though with its slate of i-ActivSense active safety and what we all know will be a nicer interior. It’ll be a tall task asking the higher end Santa Fe trims to take on the Mazda but as we mentioned before, the gluttony for SUVs means there’s a piece of the pie for everyone and the Santa Fe should look towards the entry level trims to get a slice of that lucrative pie… provided people remember it exists.