Alicia Corbett
As a born and bred Penangite I am proud of the status that my state’s street food has reached, both locally and abroad. However, there are occasions when I find myself struggling to source a suitable venue that offers Western food as the options are usually of the budget-friendly variety or fine dining establishments ––– many of which have seemed to pop up in recent years. 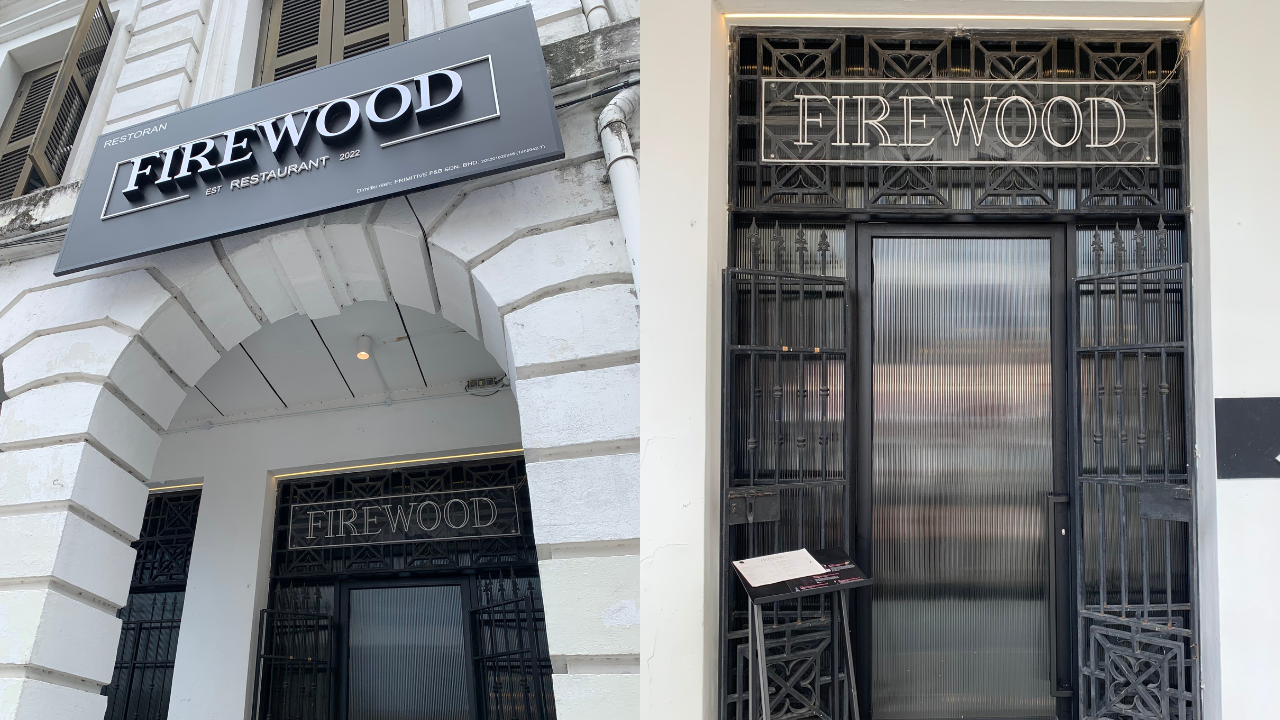 Although there are several around if I search hard enough, Firewood Restaurant Penang, an open-flame restaurant which opened in late October, seems to be a place that fits my criteria. Keep your eyes peeled as you drive through the bustling streets of Jalan Masjid Kapitan Keling, as the restaurant is sandwiched between other businesses and sports a simple black and white signage.

A helpful landmark is the St. George’s Church located opposite. As with any other location in the heart of Georgetown, parking is a huge struggle and I had to circle around for a good 15 minutes before locating a spot. 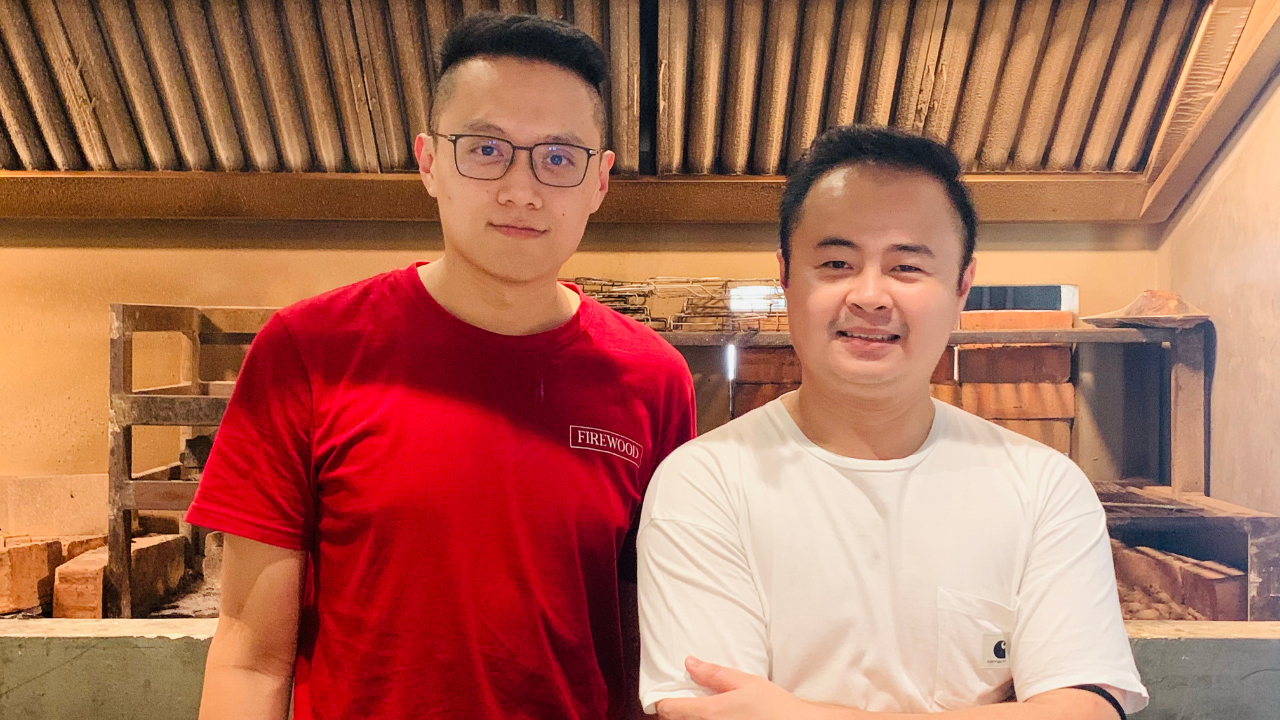 Here, Chef Ker Yang Hao and Chef Lew Jia Jiun have curated a simple menu that plays their strengths of turning up the heat in the kitchen. Chef Ker, 28, who hails from Taiping, studied culinary arts at UOW Malaysia KDU Penang University College before moving overseas for a brief tenure at The St. Regis Singapore.

Chef Lew, 31, whose hometown is Johor, studied abroad at a Taiwanese university before quitting his studies to seek greener pastures in the Lion City. The duo first met during their stint at Bread Street Kitchen by Gordon Ramsay at Marina Bay Sands Singapore.

There, the two met the hot-headed chef –– whose restaurants have amassed a total of 17 Michelin stars throughout the years –– a handful of times. At Bread Street Kitchen, they picked up food knowledge, management skills, and as Lew says, “Other finer details that they don’t teach you in school.”

After they left, the two opened their first restaurant in Johor last year, Firepitz, which has a similar concept to Firewood. This is their second restaurant together and although neither are Penang natives, they said they chose the Pearl of the Orient to set up shop because, as Lew shared, “I used to come up to Penang often when I was young. We’re not familiar with KL.”

While they value their time at the renowned chef’s eatery, the two hope to make their own mark on the culinary map in Penang and are not trying to replicate the British menu of the Singaporean restaurant, choosing not to include the famous beef wellington dish. 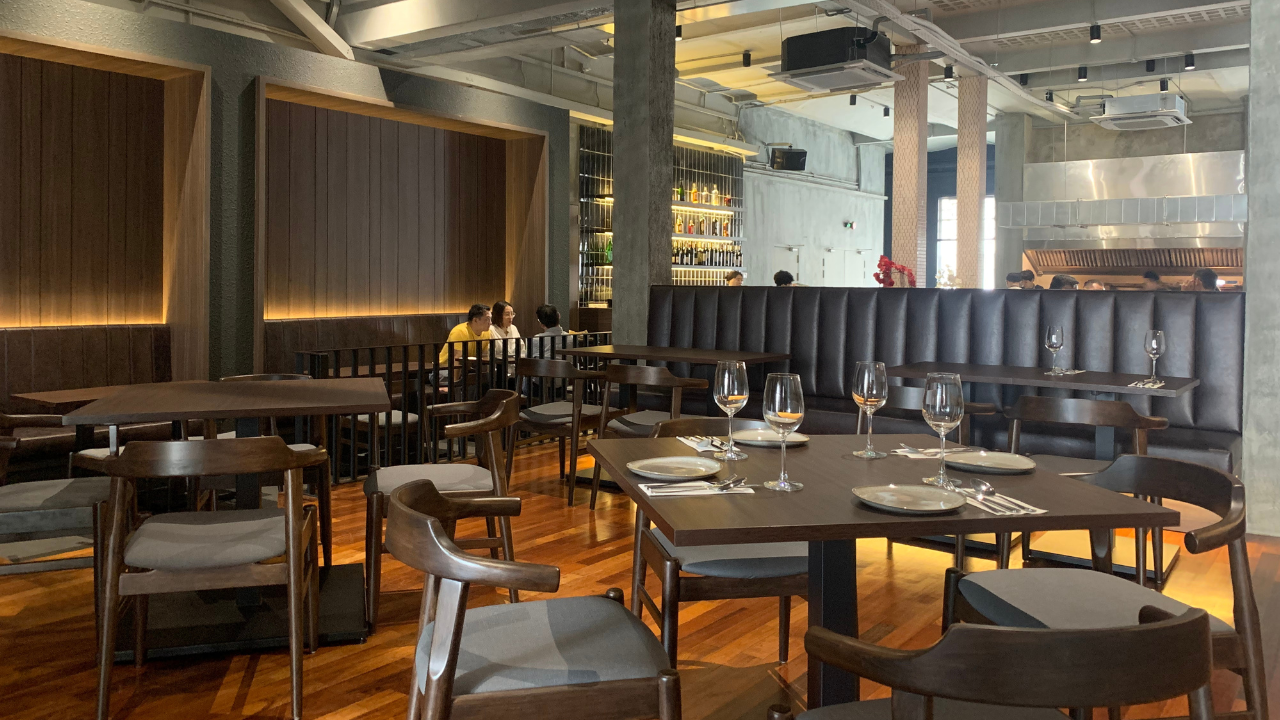 The two had a specific vision in mind for their casual dining place that centres around using an open space. Ker said, “We looked at 20 shop lots before deciding on this spot because we wanted a spacious area where you can see the fire once you step in.” Their restaurant is set in a building owned by The Star newspaper and was formerly their museum space. 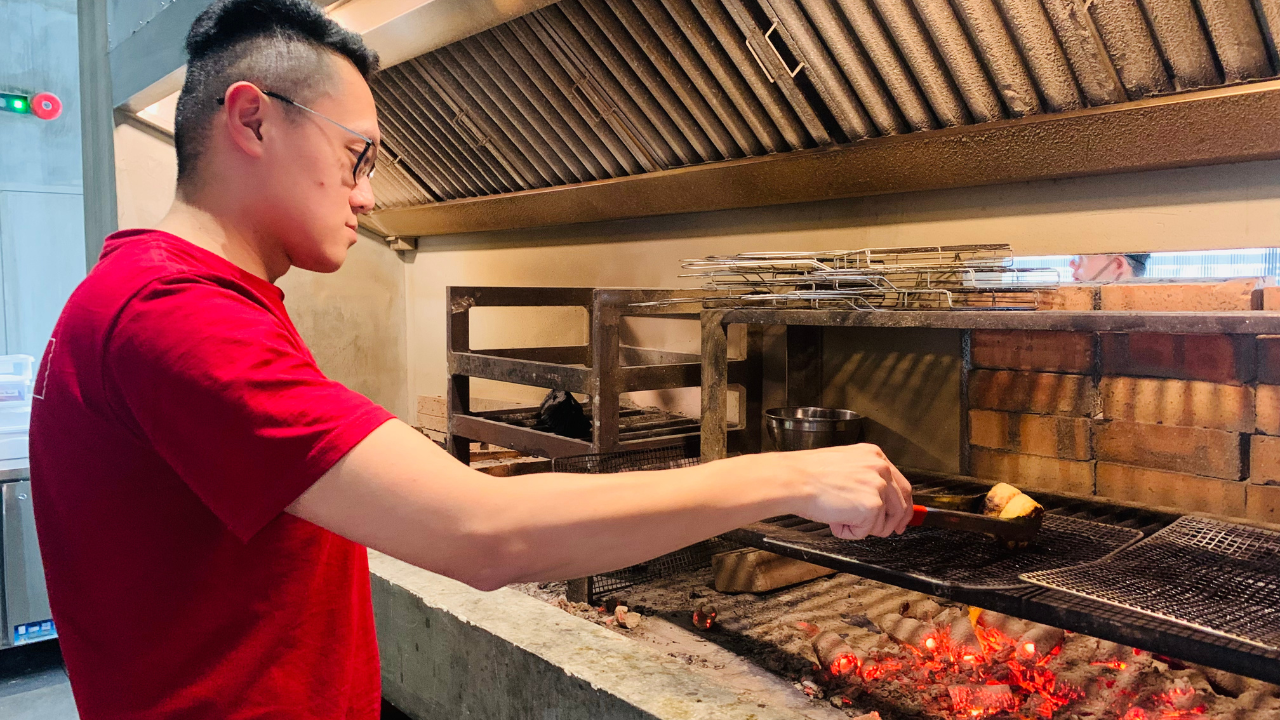 They worked with metal specialists to create their custom-made metal rack for grilling, which reaches scorching levels of 300 °C to 400 °C at dinner time.

They also enlisted the help of interior design studio NEVERMORE to make use of the sizeable area that resulted in an elegant and tasteful setting for dinners, with wood furnishings and black accents ––without feeling stuffy. As Ker says, “Firewood is a casual dining place for get-togethers and family gatherings.” As such, don’t expect a hush-hush dining spot where you can hear a pin drop, as the hum from the kitchen can be fairly loud.

Tables are set on an elevated platform for a better look at the kitchen, with cushioned sofa seats on the side, bar side seating for solo diners, as well as private rooms that can expand to fit 18 people.

As the chefs are still planning on a set menu in the future, we had some a la carte dishes. 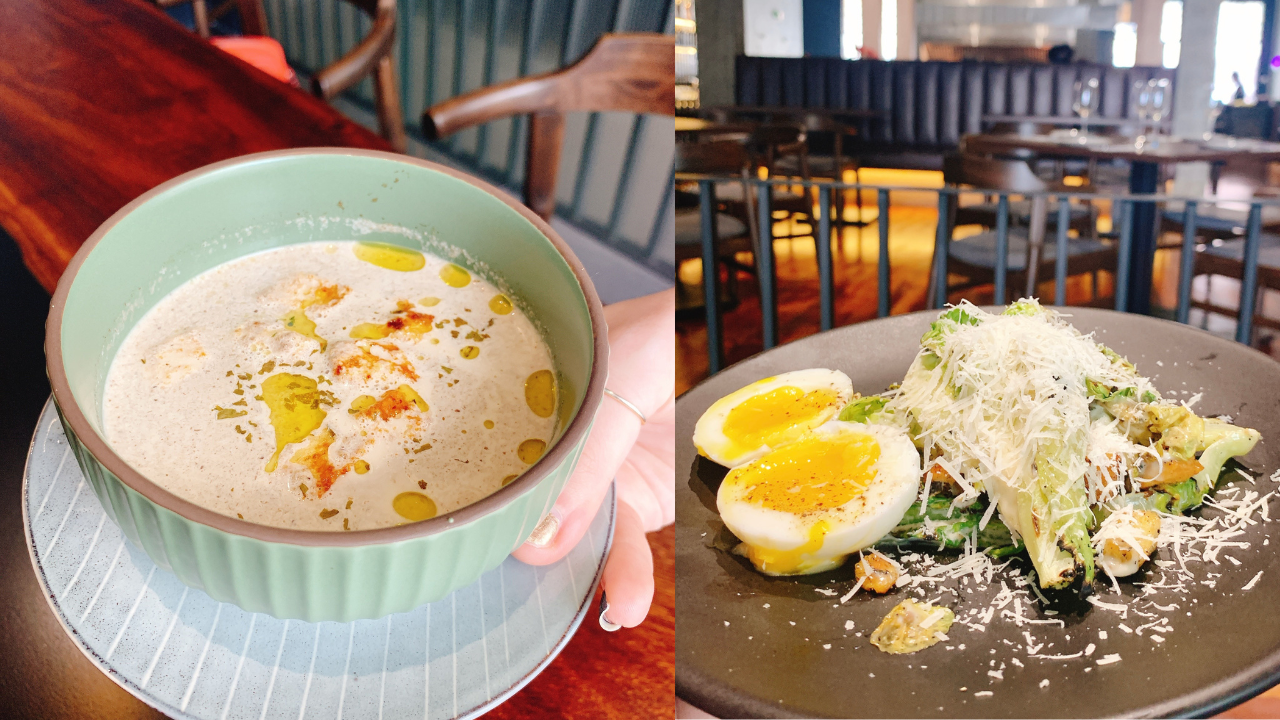 For starters, I had their Firewood Mushroom Soup priced at RM22––– it’s one of my favourite soups of all time, but not every restaurant does it well. Chef Lew shared that the soup takes 48 hours to prepare, and they only use one type of mushroom ––– button mushrooms. The result is a creamy and rich dish that was topped with croutons and just the right amount of truffle oil.

Next up, I dug into their Charcoal Burnt Caesar salad which is RM29 per plate. In all honesty, I’m a total carnivore and fresh salads just aren’t my thing, so I never eat them. However, the charcoal-grilled lettuce enticed me so I took a bite.

It was served with their homemade Caesar dressing, half-boiled eggs, croutons, and freshly grated parmesan cheese. I was pleasantly surprised as the flavours came together well with the lightly charred texture and creamy taste. 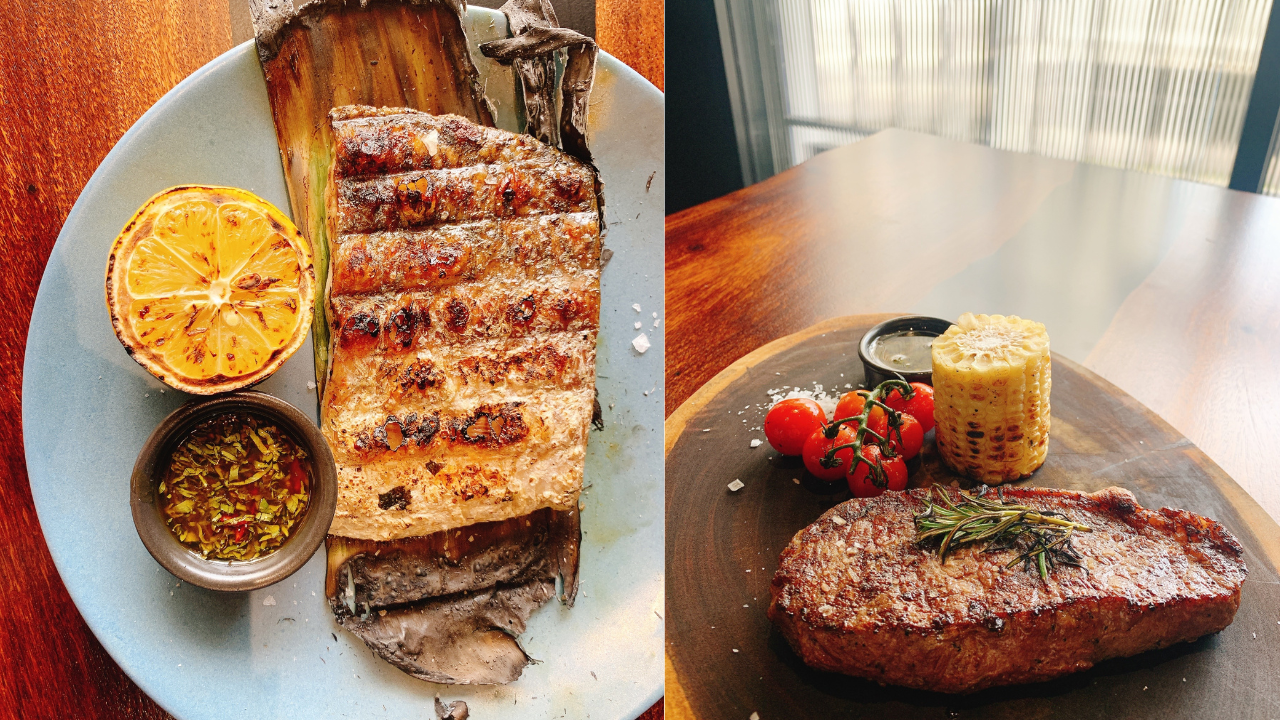 As I mentioned, I’m more of a meat person so I practically never deliberately order fish. The chefs shared that they bring in their fish from Johor, from their source that feeds the fish using biotechnology to give it fleshier meat.

I tried their Grilled Barramundi Fish (RM49 for the mini, RM88 a whole piece) that was served with sour plum sauce that complemented the dish well and gave it a refreshing taste. Even without the charred lemon, the meat was succulent and didn’t have the usual fishy smell.

They have several steak selections on the menu with the Japan Miyazaki A5 Wagyu Sirloin at RM185 per 100 grams being the more expensive. We tried their Australian Angus Sirloin (which goes for RM65 for 100 grams) and it was the pièce de resistance of the meal.

Cher Ker mentioned that they use the same brand of meat as Gordon Ramsay’s restaurant in KL and the beef used is grain fed for 200 days resulting in tender, juicy, and flavourful meat. My medium thick-cut steak was grilled to perfection with a good contrast between the outside crust and the tender meat within.

The steak was paired with Chimichurri sauce –– which sounds like a dance move –– but is made mainly of parsley, garlic, and olive oil. Initially, I didn’t want to have much of the sweet corn although it’s a barbecue staple to save stomach space but ended up finishing the whole piece as the sweetness balanced out the smoky flavours of the beef. Although I thoroughly enjoyed the main dishes, I was slightly disappointed with the dessert. The taste of the Charcoal Cream Tiramisu with Alcohol was completely overpowered by the liqueur in certain mouthfuls.

We also tried two mocktails, Hojicha Mojito –– a mix of Hojicha, Mint Leaves, Lime, and Pistachio and Cinderella –– a concoction made of fresh lemons, orange juice, and pineapple juice. With a steep price tag of RM28 and RM25, respectively, we’d recommend giving them a miss as they were nothing to shout about. 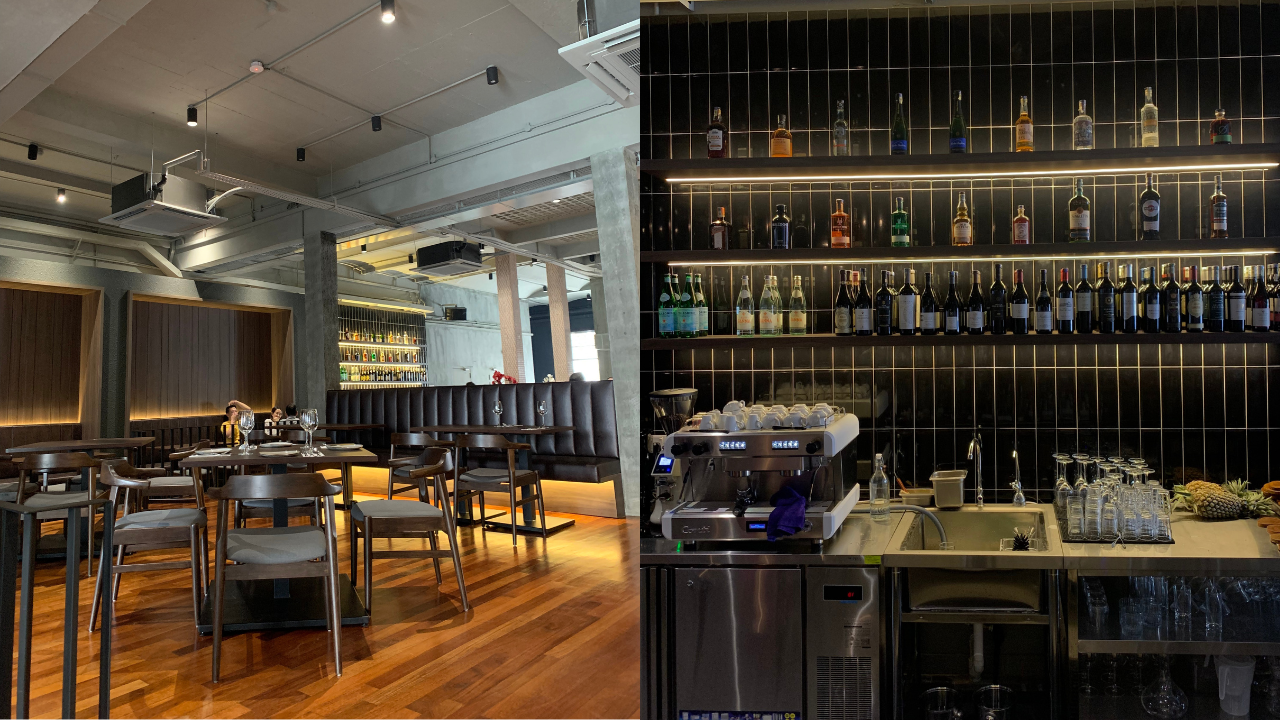 Overall, we had a pleasant dining experience, and we would return for the soup and steak in particular ––– and because I want to try their deep-fried bao with semifreddo and condensed milk next!

The restaurant is pork-free but do note that alcohol is served here.