[REVIEW] Affordable And Lightweight: We Test The Logitech G435 To See If It Lives Up To The Hype

Could this be your new gaming headphones?

Nicholas Chow
Finding a pair of good gaming headphones that's easy on the pocket is easier said than done.

You want a pair that gives you the best features and the most awesome sound quality, but the price tag will make your heart skip a beat. You want one that's affordable, but you won't get all the great features.

What you want is a little bit in between both: affordable, but has all the features that you need. 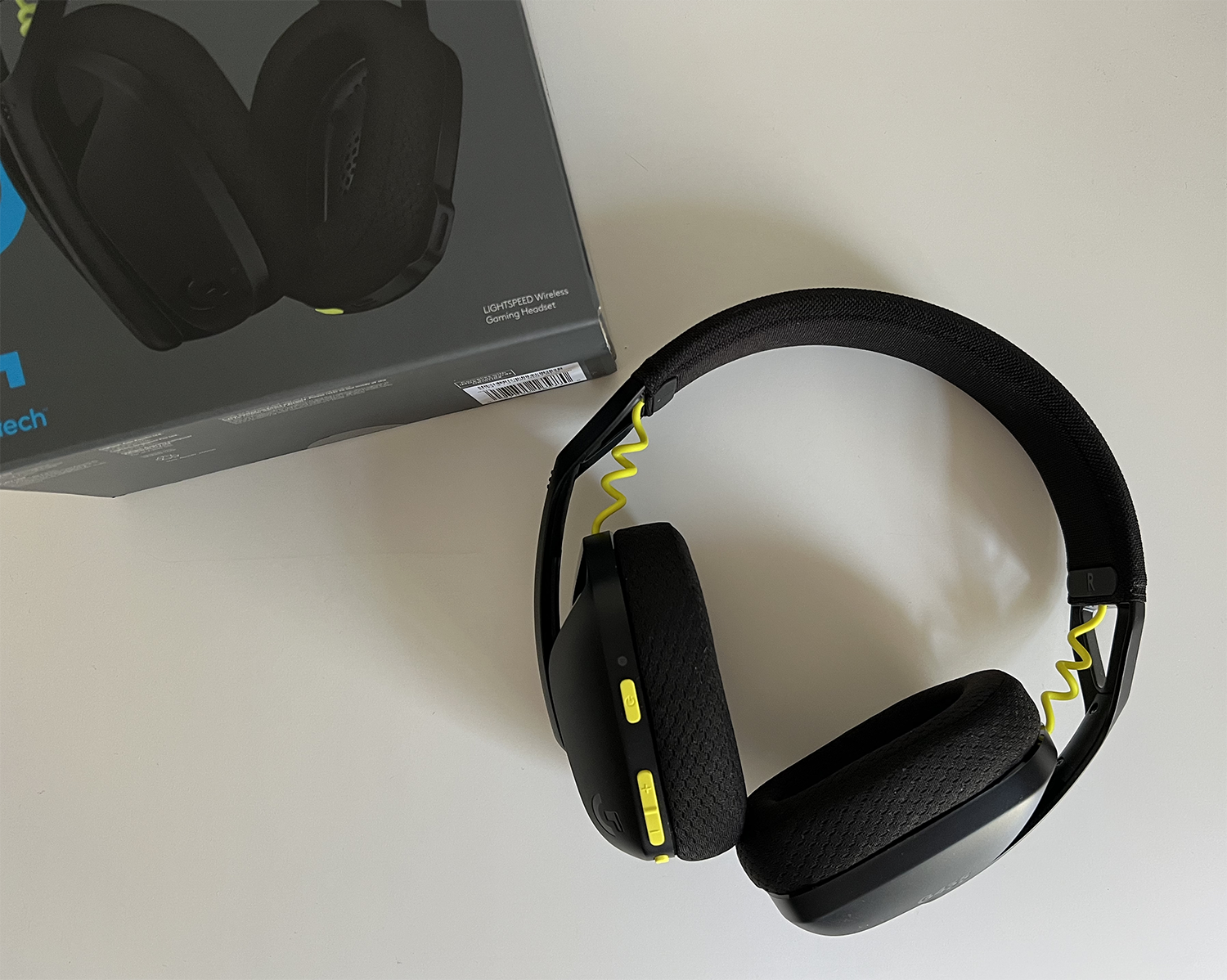 Boasting fun colour options, multi-platform support and all-day comfort, Logitech aims to bring affordable gaming peripherals to all the gamers out there with the Logitech G435.

We have to say that the Logitech G435 does look pretty good. If you're someone who likes your gadgets simple and minimalistic, you'll definitely won't find fault with this pair.

Logitech didn't go over-the-top flashy with the G435; they are three colours to choose from -- Black & Neon Yellow, Off-White & Lilac, and the Blue & Raspberry -- and all three of them of them are dual-toned.

No RGB lighting, no funky colours, no multi-coloured graffitti design; nothing. The design is subtle enough for you to wear it out in public without turning heads. 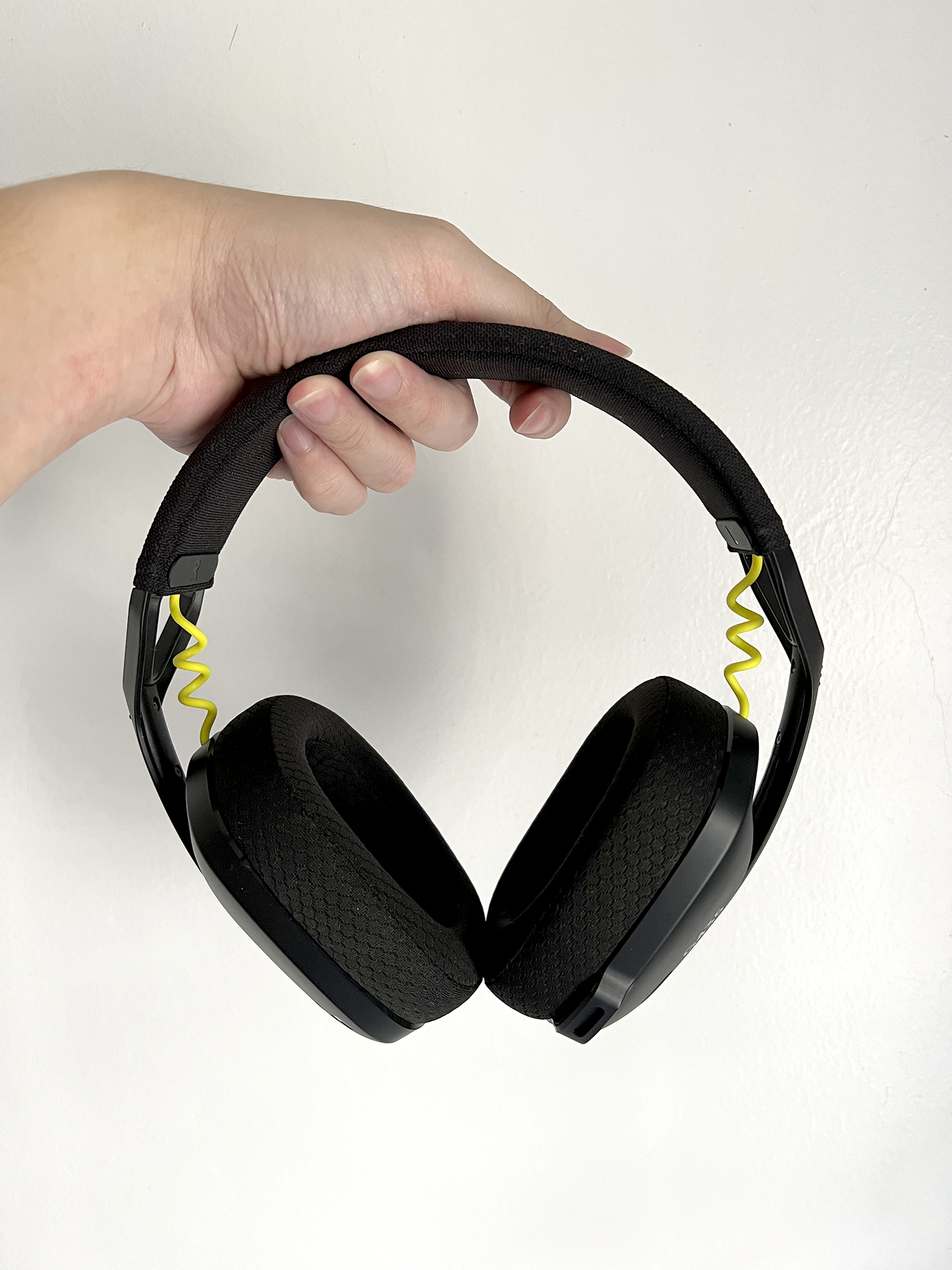 The one we got was the Black & Neon Yellow one, and we love just how subtle it looks. The entire headphones is wrapped in black, with contrasting neon yellow adorning just the buttons and the exposed wires, which makes the pair of headphones pop a little.

We also like how the exposed wires add a little ruggedness to its looks. Another thing that we're really fond of is the big 'L' and 'R' printed on the inside of the earphones, making it easier for us to tell which side goes on where.

Considering that the Logitech G435 is, after all, a very modest pair of headphones, the contrasting colours and some of the design elements give it a little character. Another design cue that we like about the Logitech G435 is the fact that it has built-in microphones instead of a boom mic that sticks out like other gaming headsets have.

The beamforming mics are located on the left cup, and during our tests running virtual meetings, our colleagues said they heard us just fine. The lack of a boom mic makes it versatile enough for you to use it during your daily commute to work or during your workout at the gym.

If there's an area that exposes the Logitech G435 as an affordable pair of gaming earphones, it's definitely in the build quality. The entire pair of headphones is made of plastic. The buttons feel really cheap as well, as pressing on them doesn't give you that satisfying tactile feedback you'll get on a decent pair of headphones. 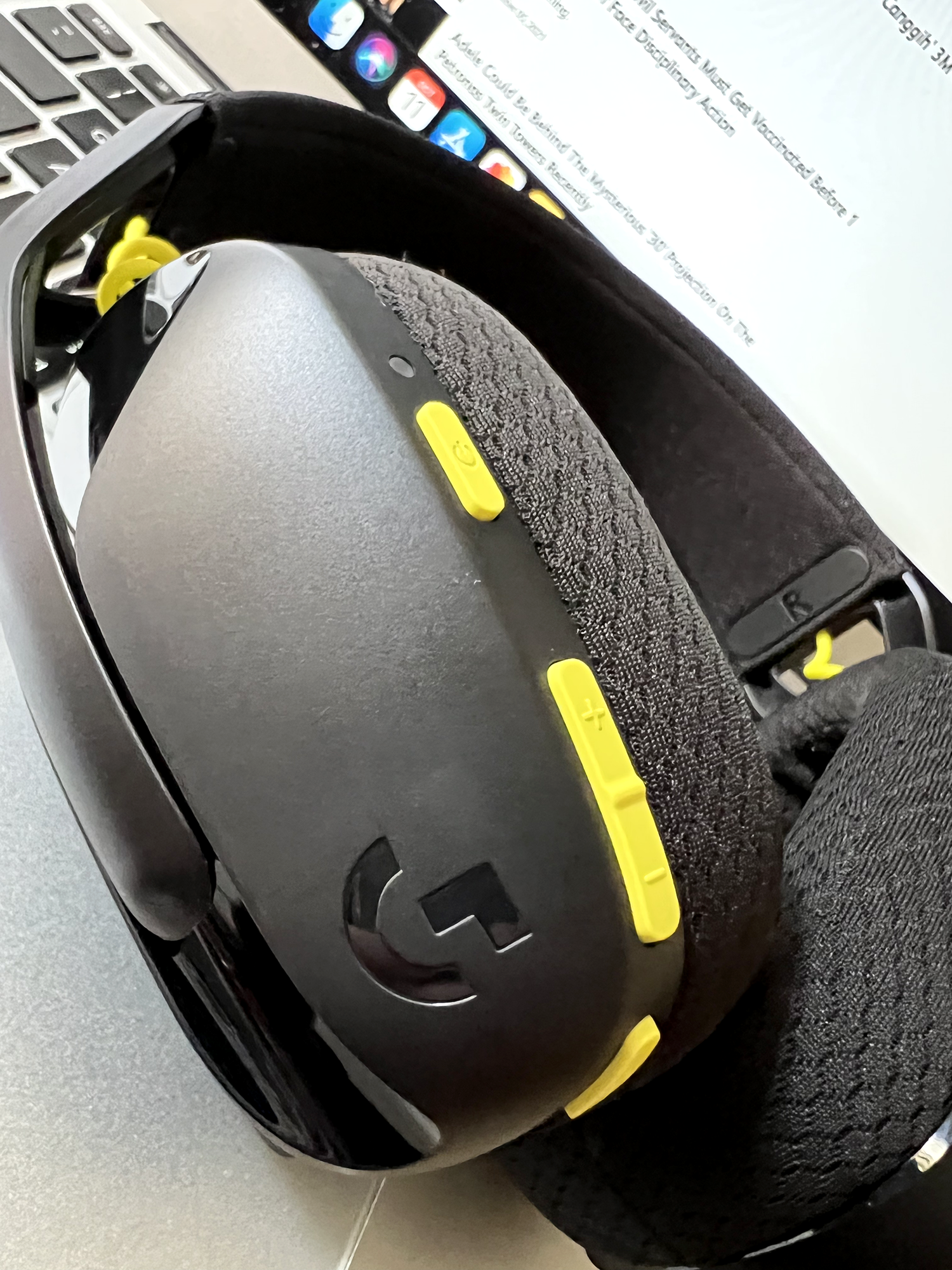 The entire frame also feels kinda filmsy as well. It is flexible enough for you to twist it a little, but we often wonder how much twisting it can take before it snaps.

And that, we feel, is the biggest complaint we have about the Logitech G435: how durable it is in the long run.

Due to the material it was made from, we found ourselves being overly careful with the Logitech G435 for the fear that it would break after an accidental drop, or one of the legs would snap off if we put it in our bag the wrong way. Or maybe, we would sever the exposed wires if we accidentally pull it too hard while removing it from our bag? We haven't tested the Logitech G435 enough to tell if the material would fall apart in the long run, but it does feel pretty durable in our hands. Only time will tell.

Cheap materials aside, there's one thing you could definitely say about the Logitech G435: it's really comfortable to wear. It weighs just 165 grams, so it is lightweight as advertised.

Now, we aren't really a big fan of earphones because we generally dislike the weight it puts on top of our head, but we didn't seem to have a problem with the Logitech G435 because of how lightweight it is. We managed to spend hours watching videos using the Logitech G435 without having the need to take it off. There is literally zero pressure on our head, and we find that really impressive

The fit is pretty snug too, as the earcups -- which are extremely soft and very comfortable, by the way -- cups our entire ear perfectly.

However, there are two things you need to take note of: 1) we realised that because the earcups are so snug, perspiration will build up at the side of your ears, especially on really hot days, and 2) there's only a limited range for the earcups to slide up and down, so if you have a bigger head, this pair of headphones might not fit you well. Another great thing about the Logitech G435 is its battery life, which is outstanding. Logitech claims that it can go up to 18 hours on a single charge, and our time with the G435 determines that they are telling the truth.

We gave the Logitech G435 a full charge when we broke it out of the box two weeks ago, and we have yet to plug it back into the charger. Now, granted that we use the headphones sporadically -- say, maybe six times in 14 days? -- but every time we use it, it's for a period of at least two hours doing a wide variety of things: streaming on Netflix, listening to music and even gaming.

We found it amazing how the Logitech G435 still have some juice left in the tank after we've been using it for two weeks now. Will it go for a month of sporadic usage on a single charge? We guess we're going to find out soon. One more plus point of the Logitech G435 is how compatible it is with everything. At the time of writing, we've paired the headphones with an iPad, our smartphone and even our laptop, and they work seamlessly well all the time. It automatically connects to our iPad or our smartphone the moment we turn it on, which is also a plus.

Pairing it with your devices is really simple as well: just hold the Power and Mute button down for six seconds, and the headphones will enter pairing mode. For Lightspeed mode, just plug the receiver into your PC or laptop and press the Power button for 1.5 seconds, and you're good to go.

So, it all comes down to this: how well does the Logitech G435 fare as an affordable gaming headphones? Well, it's decent, depending on what you use it for.

The Logitech G435 boasts 40mm drivers, and while that sounds promising, it performs well in certain areas and not so great in others. Let us break it down for you: Music:
Now, we have to admit that we are no audiophiles, but even then, we can tell that the headset is a little too heavy on the bass side and flat everywhere else. While it sounds great on bass-heavy songs, music from Adele or Andrea Bocelli will turn out pretty hollow. Movies/TV series/videos:
Just like the music test, the Logitech G435 works fine. You can hear the dialogues clear enough, but scenes with explosions and jumpscares (ugh, those goddamn jumpscares!) have a little more oomph to it because of the bass-tuned audio profile. 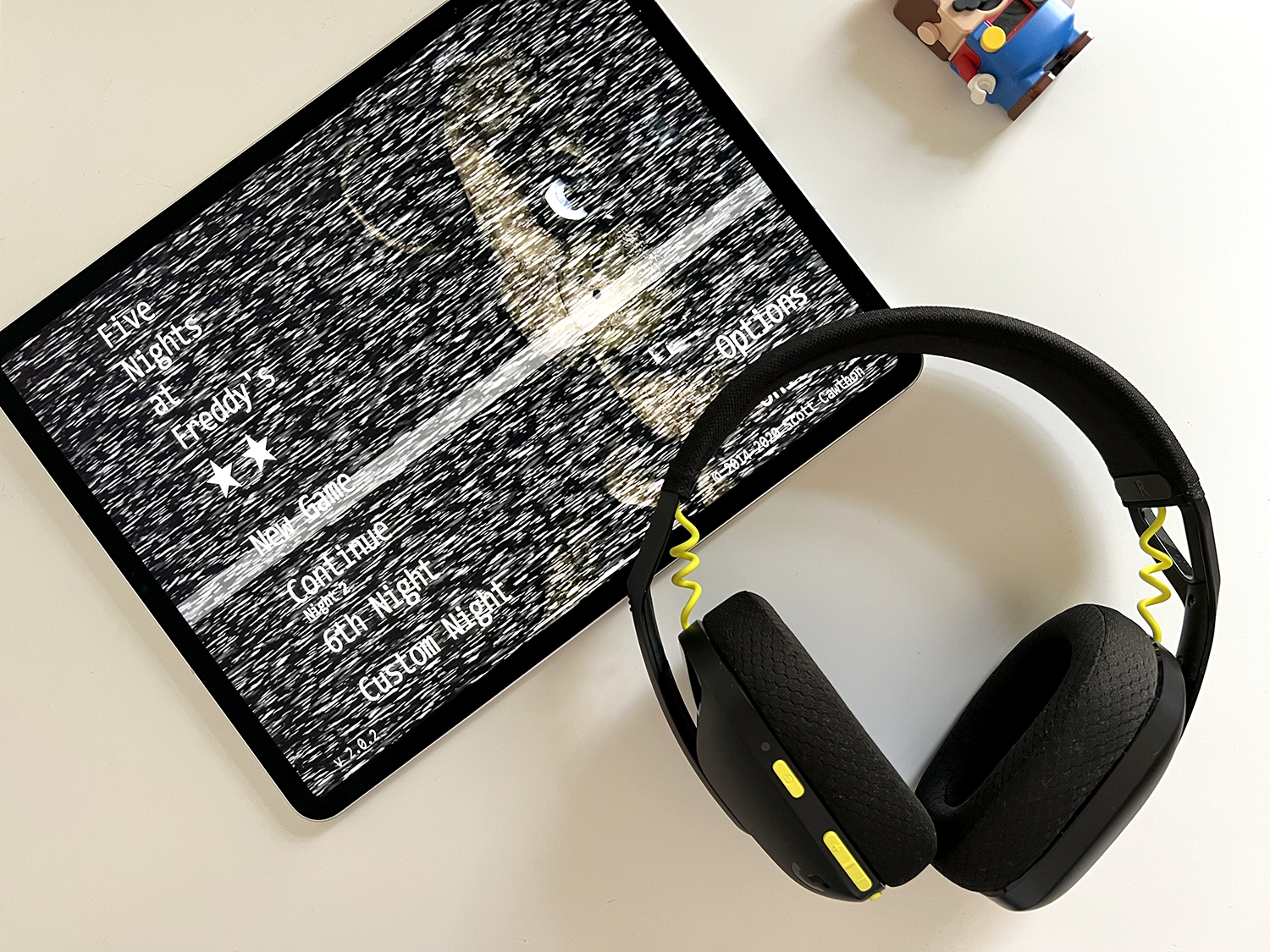 Games:
Thankfully, the Logitech G435 peforms better when you use it for games. We tested it while playing 'Five Nights At Freddy's' on the iPad, 'PUBG' on our smartphone and 'Apex Legends' on our PC. Gunfire and grenade explosions are well-represented, and we had no problems tracking the direction of an enemy's footsteps in shooter games. For other games, the sound is crisp and clear enough for you to hear what you need to hear.

Oh, we have to also add that the Logitech G435 doesn't come with active noise cancelling, but the earcups cover your ear well enough to block out unnecessary noises, like your wife's nagging, for example.

However, we do need to point out that eventhough Logitech calls the G435 an affordable pair of gaming headphones, it is, well, not that affordable. The Logitech G435 retails for RM299 - a price tag that is hardly budget nor affordable.

For that price, there are other alternatives out there, like the Razer BlackShark V2 X or the SteelSeries Arctis 1 All-Platform Wired Gaming Headset. But having said that, you also can't deny that the Logitech G435 has enough good features packed inside that lightweight frame that warrants a good, hard look.

If you have the cash to spend (but not too much), we'd say the Logitech G435 is a safe bet.

For more information about the Logitech G435, you can check out their official website here.
#Gaming#tech#gadget#review#headphones