Taking matters into his own hands.

Rojak Daily Team
We can't say how tiring it must be for food delivery riders to wait on a customer's order to be ready, but we reckon that it could be excrutiating.

So, instead of sitting down and wasting time, one abang Foodpanda decided to take matters into his own hands.

Make your food, then deliver it!

According to @broarifffff, the abang rider decided to roll up his sleeves and help the restaurant prepare the food as he had allegedly waited too long for the order to be ready.

And judging by the video, the abang rider sure looks like he knows what he's doing as he was seen confidently kneading and flipping the roti canai:

TikTok users who watched the video were impressed by the abang rider's dedication as well as his roti canai-making skills: Well, the next time you have food delivered to your home, remember to give them a good tip, OK?

Who knows, they could also be the one who made your food.

Not the first time

The abang Foodpanda was not the first delivery rider to be caught on camera making their customer's food.

Back in August, another Foodpanda delivery rider by the name of Khairul Hamizan Mustafa decided to help an elderly stall operator make roti canai for his customers because he was struggling with the large influx of orders.

According to Malay Mail, the 24-year-old rider arrived at the roti canal stall at Kubang Terong in Tasik Gelugor, Penang at 10.30am on Monday (30 August).

Upon reaching the stall, he realised that his order would take some time to be prepared as there were already four riders ahead of him waiting for their orders.

It didn't help that he was the fifth rider with an astonishing 15 roti canai orders to fulfill, and the elderly owner of the stall was overwhelmed with the large number of orders. 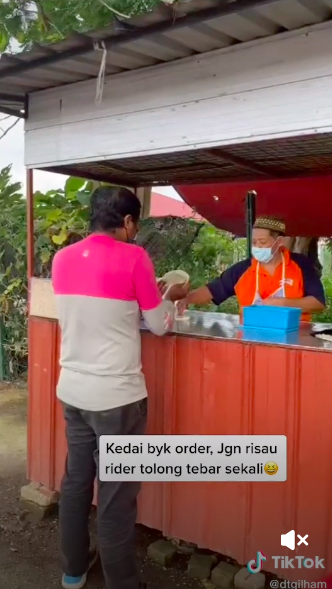 So, Khairul Hamizan decided to roll up his sleeves and do what nobody expected a food delivery rider to do: help the stall owner make roti canai.

Luckily, his roti canai making skills which he learnt while helping out his parents at their own roti canai business in Kepala Batas came in handy.

"My parents also sell roti canai; they maintain a stand in Pokok Sena Kepala Batas and are still in business. My mum taught me how to do roti canai while I was in Standard Six.

"I used to help my parents with their business during my school holidays, especially on weekends," he told mStar.

His roti canai-making skills were caught on tape by a colleague, who later posted it on TikTok.