That's a little pricey, ain't it?

RD Minion
Recently, a floating seafood restaurant in Langkawi came under the spotlight for charging a group of diners an exorbitant amount for a 'siakap' fish dish:


Now, a nasi kandar restaurant in Penang has been thrown into the same spotlight.

The Hameediyah Restaurant, the oldest nasi kandar restaurant in Penang, has been asked to explain the sales price of a dish sold at their premises.

The restaurant has come under scrutiny after a Facebook user by the name of Huzir Rizal uploaded a copy of the receipt totalling RM106.60, with RM100 being charged for two fresh 'sotong goreng' (fried squid) alone.

Huzir's post has since gone viral on social media, with many criticising the restaurant for charging that amount of money for a 'sotong goreng' dish. 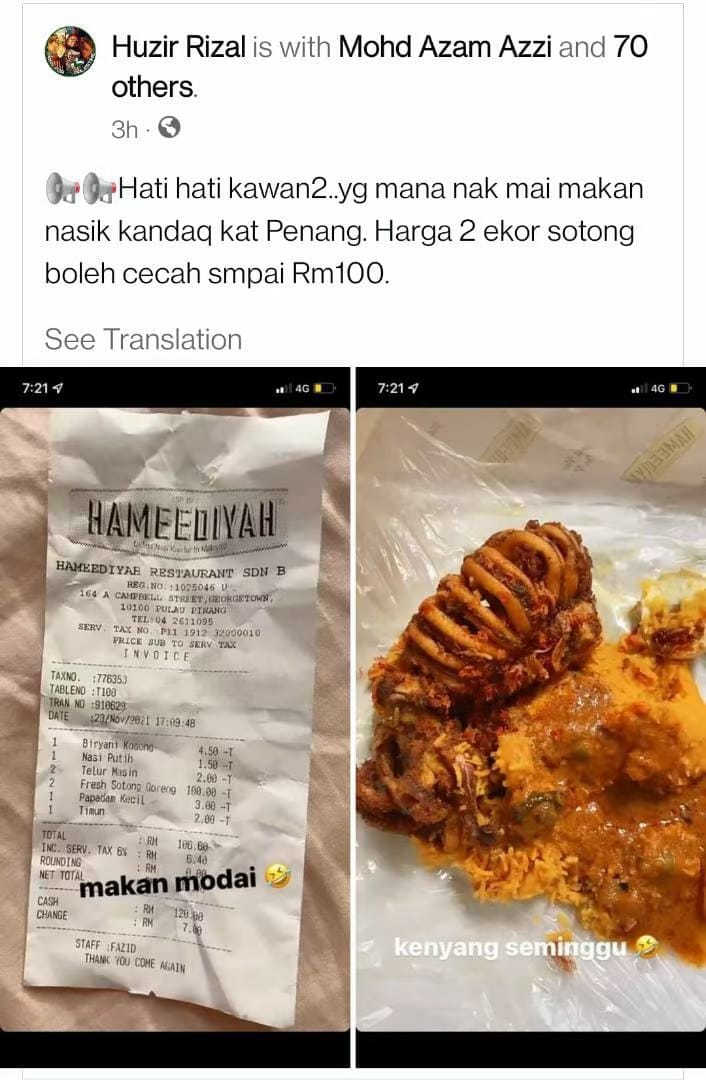 The matter has since caught the attention of the authorities, as the Domestic Trade and Consumer Affairs Ministry has issued the operator of the restaurant with a Goods Information Verification Notice (NPMB) to explain the cost of the dish.

Its director Mohd Ridzuan Ab Ghapar told New Straits Times that the restaurant has two days to respond to the notice, failing which action can be taken against them under the Price Control and Anti-Profiteering Act 2021.

Mohd Ridzuan said they had always viewed seriously the issue of price increase or possible elements of anti-profiteering by traders.

"If there is any unreasonable increase in price, we urge consumers to lodge an official complaint to the ministry," he was quoted as saying.

According to the report, several officers from the Ministry were spotted at the restaurant on Wednesday (24 November) to investigate the issue and record a statement from the operator.

After the issue blew up on social media, a spokesperson from the restaurant stood forward to give their side of the story.

Muhammad Riyaaz Syed Ibrahim, the director at Hameediyah Lebuh Campbell, told New Straits Times in a seperate report that he was the one who served the couple who ordered the 'sotong goreng' dish.

Muhammad Riyaaz insisted that the restaurant has listed the price of the dish, ranging from RM10 and RM150, on the board. 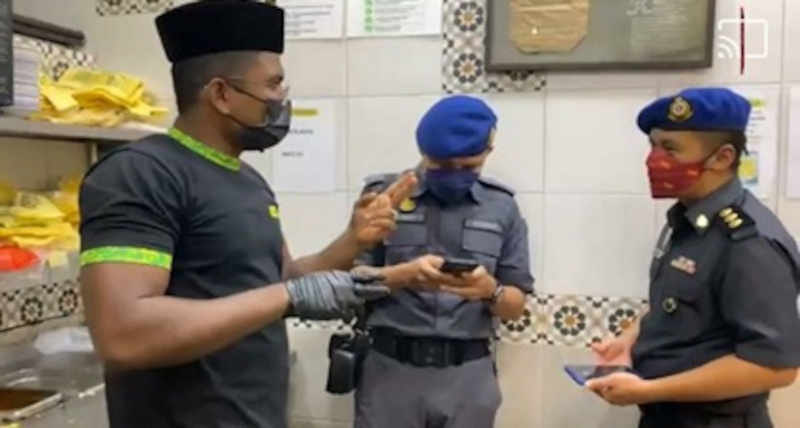 According to Muhammad Riyaaz, the couple did not enquire about the price when they ordered the dish. In fact, they did not raise any objection when Muhammad Riyaaz keyed in the price.

"I was the one who had attended to the couple. The woman clearly saw when I punched the amount on to the computer system at the cash registry. She did not complain or say anything then.

"Unfortunately, they decided to post the copy of the receipt on social media. They purposely want to viral the receipt," he was quoted as saying. Muhammad Riyaz further explained that the squid the restaurant uses for the 'sotong goreng' dish is not cheap, as he personally sourced them for between RM35 to more than RM40 per kilogramme.

"The sotong goreng we packed for the couple was of big size, which was supposed to have cost between RM110 and RM120 for two. However, I gave them a discount," he was quoted as saying.

The customer who posted up the picture of the receipt has since come out to issue an apology over the confusion.

The unidentified woman left a message on Hameediyah's Facebook page on Wednesday night, confirming that she had visited the restaurant with her partner at 5pm the day before.

In her note, she went on to explain that they had ordered two 'sotong goreng' priced at RM50 each. She also confirmed that she saw the owner of the restaurant keying in the price of the dish, but she did not object to it because she was aware of the price as she's ordered the same dish during her previous visit.

"I uploaded it to my Instagram story but did not mention anything about it being expensive.

"However, an individual had screenshot my posting and uploaded it onto the Facebook page. The individual also tagged 70 others with the caption 'Hati hati kawan2.. yg mana nak mai makan nasik kandaq kat Penang. Harga 2 ekor sotong boleh cecah smpai RM100,'" she wrote.


The woman has decided to come out and set the record straight, as she felt that the price was reasonable as the 'sotong goreng' portion was huge.

"As such, for anyone who misunderstood and claimed that I had said the price was expensive, that is not true at all," she wrote.

She further confirmed that the price she paid for the two dishes was the same as she had paid before this.

"I had no intention to viral my posting but it was another person's doing. I hope that with this explanation, people will not misunderstand between the price and my actual posting.

"I hope everyone out there is clear with the issue," she further said.