He Held His First Solo Exhibit Featuring Dinosaurs in Malaysia and Sold RM25.7k In 7 Days

Marcus Lee
Eugene Foo is a former art lecturer who had recently quit his job in May and decided to use his free time to finally fulfil his dream of holding an art exhibition.

The subject of his art exhibition? Dinosaurs in Malaysia living harmoniously together with humans.

Titled Saya Seekor Dinosaur, the exhibition at Awegallery in Taman Paramount premiered on 29th July and will run to 7th August (it's the final weekend at the time of publishing).

The title Saya Seekor Dinosaur was inspired by the title for karangans we used to have to write in school like Saya Sebatang Pen or Saya Sebuah Beg (remember buku contoh karangan? Wonder who wrote those). 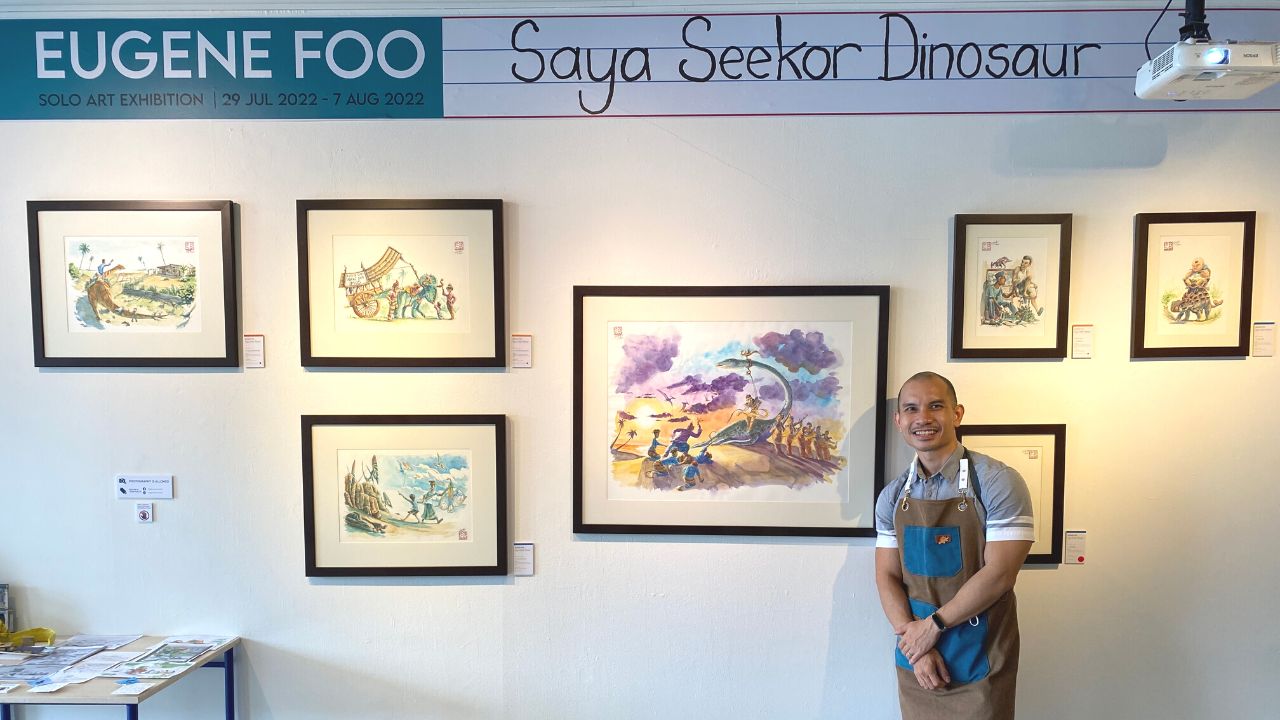 More interesting than his subject matter is the fact that he's already sold 25 of his 31 pieces on exhibit with prices ranging from RM350 per piece of art at A4 size to RM3,400 for Imperial-sized (76cm x 58cm) pieces (A3 sizes start from RM800 a piece).

“I delved a lot into my childhood memories in the early 80’s when I was producing this series. A few of the artworks are even inspired by my own personal stories. You will also find some pieces having iconic food, props or activities from that decade which I am sure many Malaysians who grew up with me in the same era can identify with as well,” commented Eugene.

When asked, he said the works were created as a direct pushback against Hollywood depictions of dinosaurs that always potray these creatures as violent animals.

Instead, his exhibit portrays dinosaurs living in harmony with humans. Growing up, Eugene learned drawing from dinosaurs and he credits James Gurney's Dinotopia as his main source of inspiration. 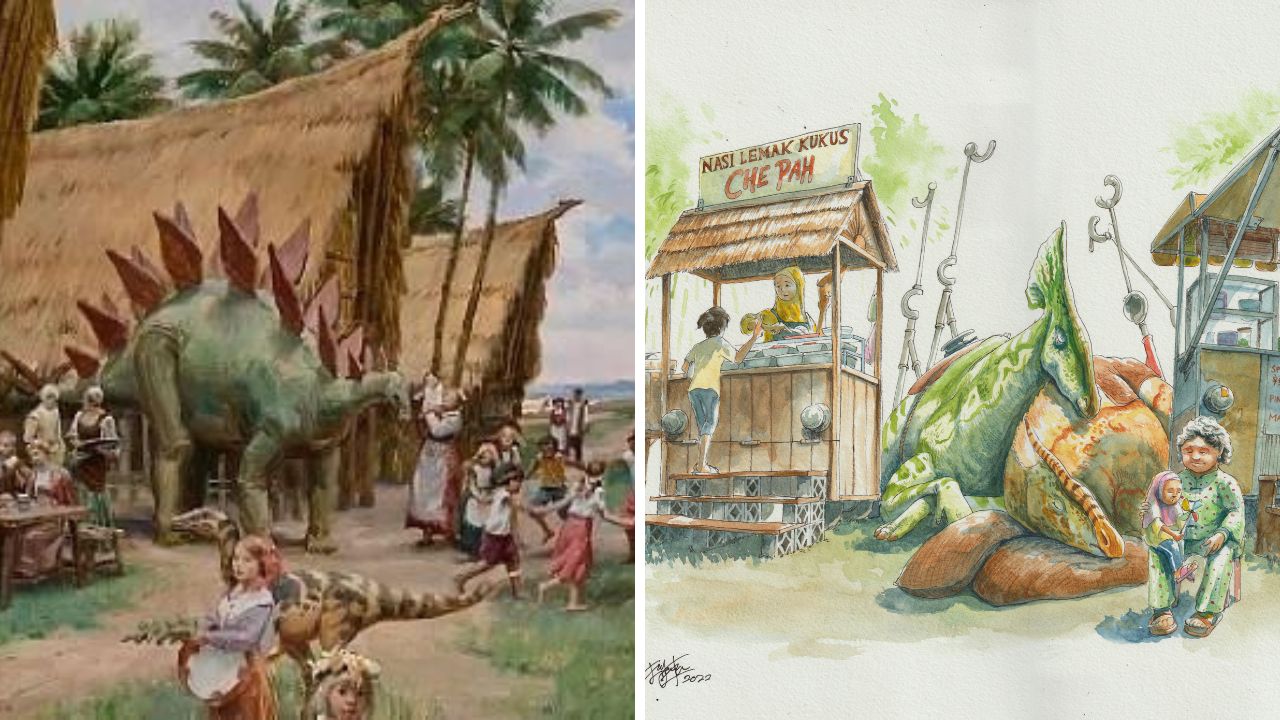 An image from James Gurney's Dinotopia next to Eugene Foo's artwork

After resigning from his position as a lecturer, Eugene had 37 days of leave before starting his new job and decided it was the best time to bring his dream of an exhibit to life. From May to July, it took Eugene 2 1/2 months to complete all 31 pieces for display—with another two weeks of framing.

While his A4 creations began life as sketches before being committed to paper water colour and polychromos colour pencils, his larger pieces on the Imperial canvas required more work, from creating 3D figures of his work to understand shadows and light, to scanning and colouring them digitally before recreating the final artwork on paper. On top of depicting everyday life in the 80s for him, some pieces also feature Malaysian folklore next to dinosaurs. His piece Ulek Mayang in particular depicts the eponymous song and folk dance from the state of Terengganu. If you didn't know (like us) Ulek Mayang's lyrics tells the story of a sea princess, Tuan Puteri Mayang Sari that fell in love with a simple fisherman by the name of Awang. 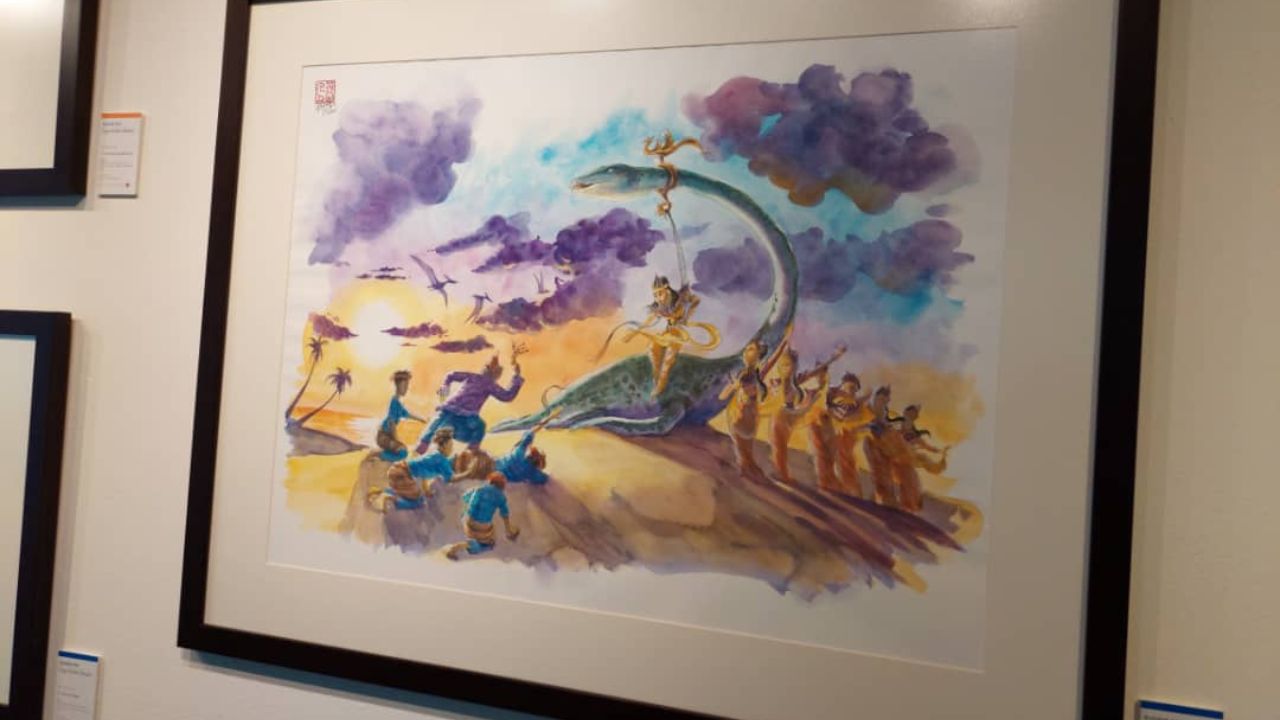 We asked if this would be the first and last exhibit for his whimsical artworks and he told us he would definitely like to hold another exhibit. Eugene admits that he was overwhelmed by the positive response by vistiros to the gallery and the proceeds from this exhibit will be going towards his next show.

Who ever thought we'd see the day where we'd see a man selling dimsum atop a triceratops? 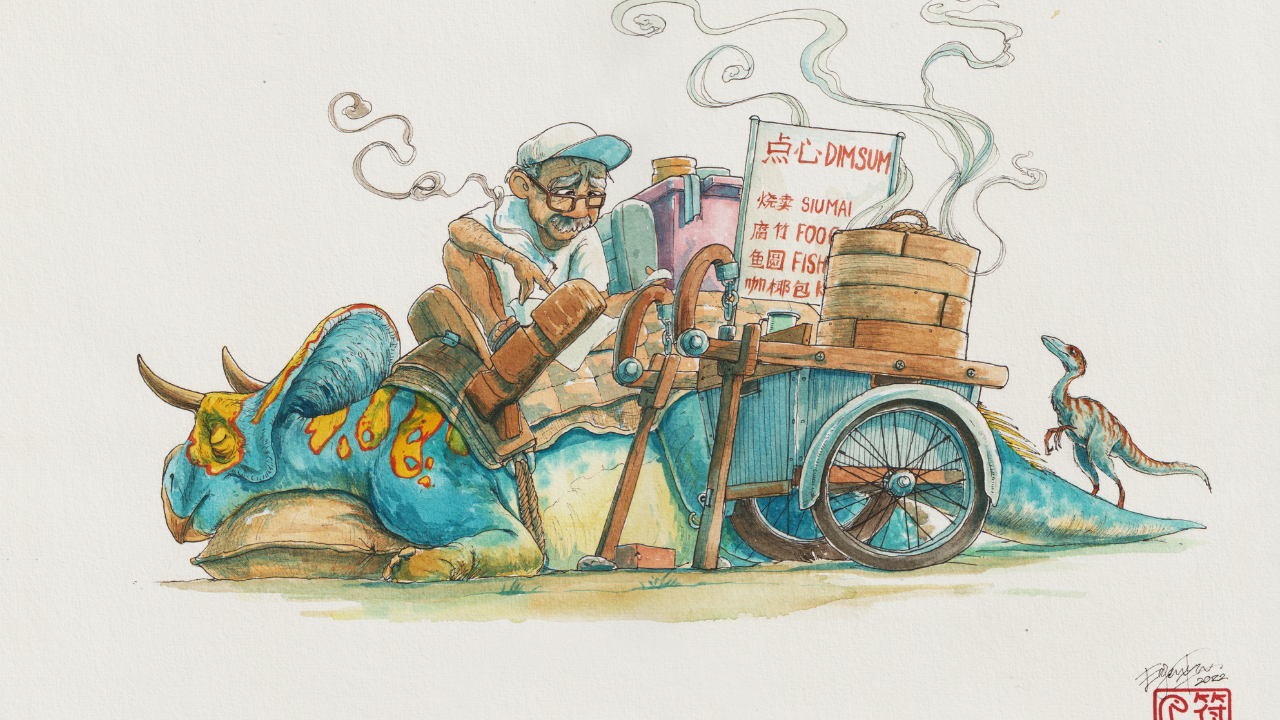