Jeju Island Is Now Open to Malaysians! Here’s Our Personal List of What To Do There

Alicia Corbett
Jeju Island or ‘Jejudo’ as it is known to the locals, is one of the first destinations that come to mind when visiting South Korea, and with good reason. The largest island in the nation offers a plethora of attractions to suit different tastes from restaurants offering authentic local delicacies to pristine beaches.

On 1 June 2022, the island’s borders reopened with a 30-day visa waiver program, which had previously been suspended since February 2020 due to the pandemic.

Foreigners can now visit Jeju using an online system known as K-ETA, or the South Korea Electronic Travel Authorisation, which also means that an arrival card is no longer required. This is also to curb illegal tourists staying beyond their stipulated dated.

Malaysians can now register their travel information and obtain authorisation before departing. Eligible passport holders can apply online and receive the approved K-ETA by email. With the K-ETA, you can visit South Korea for tourism or business. It’s valid for 2 years and can be used for multiple trips to South Korea.

Do note that a K-ETA is only required for those who are landing at or wish to visit any other part of South Korea. If you are traveling directly to Jeju Island, you do not need a K-ETA. Plus, if you visit in spring, there are stunning canola fields right nearby to lose yourself in! The Seongsan Ichulbong Tuffcone is a UNESCO World Heritage site and is said to have the best view of the sunrise on the island. Getting to the top involves a good climb, so be sure to wear proper shoes. No slippers ah! Admission fees are charged upon entry.

In this writer’s mind, they’re called the octopus aunties. Catch the ‘haenyeo’ or the Jeju women divers’ performance, a representation of the strong women of the island who dive into the sea to catch seafood.

The waterfall is easily reachable and is a 10-minute leisurely stroll from the entrance. It’s clear and deep waters are hypnotising just to gaze at besides being surrounded by a variety of rare plants. Keep an eye out for the ‘Face of Cheonjiyeon’, a stone formation which in a certain light resembles a person’s appearance. Who doesn’t love bears? The museum hosts a wide range of teddy bears, from the ‘most expensive bear in the world’a Louis Vuitton bear, a Breakfast at Tiffany’s bear and even bears dressed in hanbok. Some of the exhibits have moving parts placed in fascinating backgrounds, so you could definitely spend all day looking at each one. Also nearby are Ripley’s Believe it Or Not! Museum, the Cheonjeyeon Waterfall and the Yeomiji Botanical Garden.

Pack extra socks for this walk because the 12th longest lava tube in the world is almost 9 kilometres long, although only 1km of it is open to tourists. It gets cold and damp too so make sure to pack a lightweight jacket. Marvel at the stalagmites and stalactites and look out for bats hanging from the ceilings. The natural formation of ‘The Stone Turtle’ is unique as it forms the shape of the reptile and the structure of Jeju Island.

One and Only Café Jeju is home to some of the most beautiful cafes in the country that take advantage of its stunning sea views. This one has a gorgeous beach in front and the famous Sanbangsan mountain behind it. Sit back in one of their lounge chairs or head to the roof to catch swimmers go past.

If you love Korean BBQ, Jeju Black Pork will bring your love to another level. Cooked over a charcoal-fuelled grill, the emanating smoke gives the red meat a unique flavour and fragrance.

The word ‘black’ actually refers to the colour of the pig’s hair rather than the meat which is bright red. Wash it down with shots of soju for the perfect meal. This specialty dish can be found at the Dombedon restaurant at what is known as the ‘Black Pork Street’ 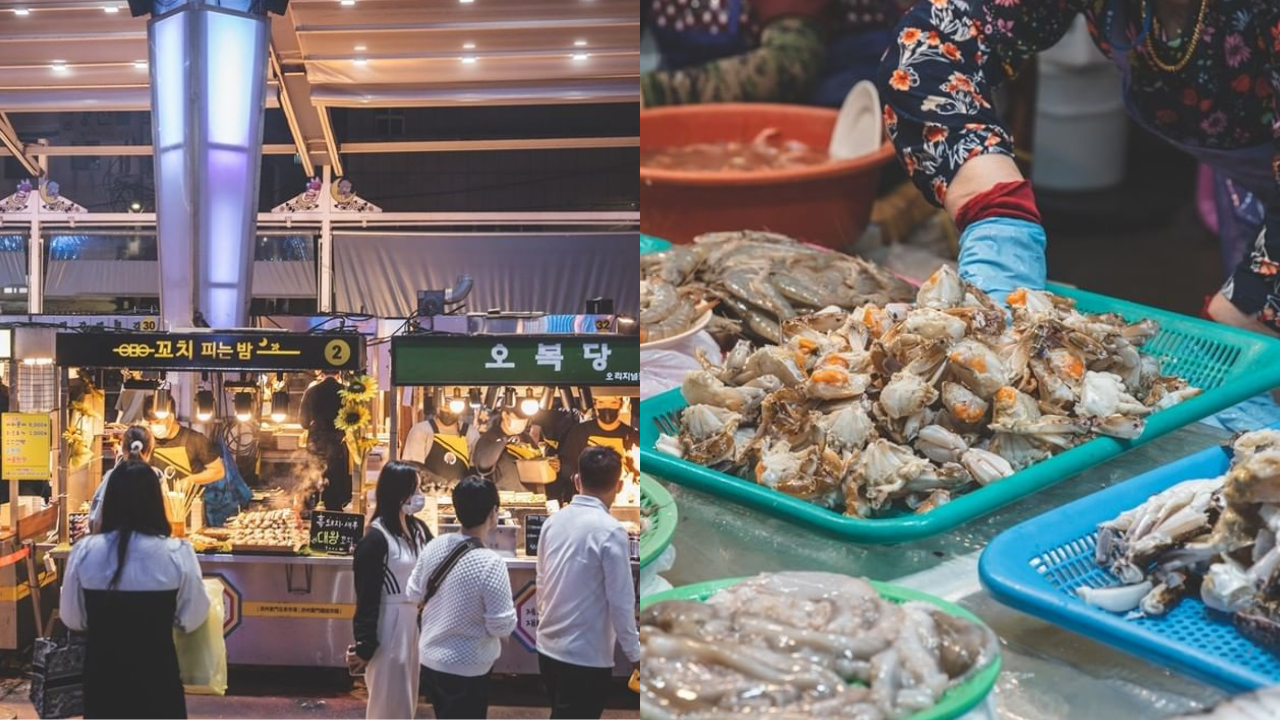 Jeju’s largest market combines a street market, a night market, a traditional market and a seafood market all in one. Try a little bit of everything here with modern street market stalls set up at night. They serve up not only Korean fare but also those from other countries such as China and Japan. Snack on some egg-wrapped kimbap or abalone kimbap. Jeju is home to many quaint guesthouses. Kasan Tobang offers the unique experience of staying in a ‘hanok’, or a traditional Korean house. The rooms are cosy and have ‘ondol’, the underfloor heating system that is sure to keep you warm in winter For those who prefer luxurious stays and have some budget to spare, The Seaes Hotel & Resort is the ideal tranquil holiday destination budget with sprawling grounds right next to the ocean, located in the Baeritnae Sea Village. Fun fact: scenes from Hyun Bin’s drama Secret Garden’ were filmed here!

The ‘Korean Hawaii’ is sure to be an idyllic visit with drama locations, stunning scenery and scrumptious eats. After stepping foot there, you’ll discover that visiting it once is definitely not enough!