These Malaysian NFT Creators Are Minting Art For Charity

Marcus Lee
If you’re not in the know, Non-fungible tokens or NFTs are a cryptographic asset on a blockchain with unique codes attached to them that distinguish them as unique.

Think of it like a certificate of authenticity. There are many posters and recreations of the Mona Lisa out there but there’s only one authentic one out there and we all know which one has value.

So, while a jpeg of a piece of mouldy bread is free for anyone to copy infinitely, a minted jpeg (registered on the blockchain as an NFT) has a piece of code in it that signifies it as special and hence, valuable.

In Malaysia, the platform of choice for buying and selling NFTs is Pentas.io which trades in Binance Coin or BNB. Its Western counterpart would be OpenSea which trades with Ethereum. TL;DR, the platform is the marketplace, and the coins are the currency they trade with.

Within this community, we spoke to a group of creators and friends who have found a way to use this marketplace for good and have taken on the task of minting for charity.

Joanne Thong, is one such creator who has committed to giving away some of the proceeds from the sale of her artwork to children’s charities.

Together with a partner who creates the artwork, the pair have sold her collection of self-portraits almost immediately after the artworks go on sale. 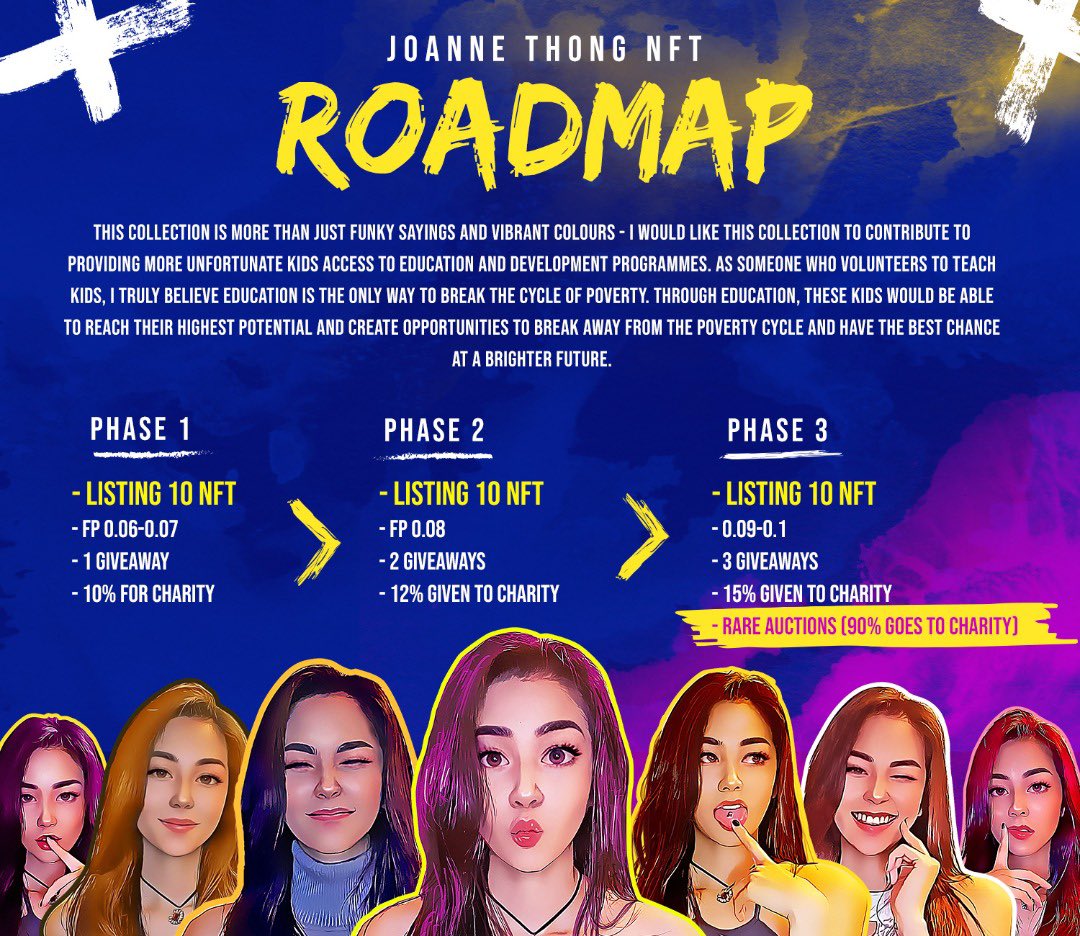 With phase one and two of her project done, she’s preparing for phase three and a special auction where she will donate 90% of the proceeds. The special collection will feature artwork from the children that will become part of the NFTs.

Another artist, who goes by the username PunctuaLee, launched his series of punctuation-mark-shaped avatars in 2021.

The full-time NFT creator launched his 1NFT1BOOK initiative in which he donates one book for every PunctuaLee NFT sold. He’s sold 199 of 213 minted NFTs and you can find his contributions at the Children’s ward in Sarawak General Hospital. To date he has given many books, food, a child walker, an activity station, a white board, and many more.

Creators TigerPunks and RongieShelter have focused their efforts on animals, specifically towards Malayan tiger conservation and for animal shelters around the world respectively. TigerPunks is the initiative of Dr. Farizan and Dr. Zul who noted that there are less than 200 Malayan tigers left in the wild and they’ve created an NFT to represent each one.

To date, they’ve donated monthly to WWF, Zoo Negara, and Zoo Melaka that all have Malayan tiger conservation programs.

Creator RongieShelter were more transparent with their donations and mentioned they donated RM1040 to a shelter in PJ3 after the sale of their first series of NFTs and the second series has raised RM660 so far to an organisation called ResQ in University Utara Malaysia (UUM).

Before speaking to this group, we thought NFTs were merely another way for the rich to get richer by building false scarcity. But just like everything in life, it depends on the hands holding the reins.

We think Joanne put it best when she shared, “One of our main goals of this project is to help people realise that the NFT market is more than digital art. It’s a decentralised way to get stakeholders onto a united goal or purpose.”

We can get behind a good cause any day. Are you minting NFTs? Let us know about your project, and DM us on Facebook or Instagram.
#Malaysia Boleh#nft