Alicia Corbett
People may have different reasons for emigrating, from marrying someone of a different nationality to just simply wanting a fresh start in life somewhere else. While some of you may have a favourite city in mind to move to (for this writer personally, it would be Seoul), many people seem to think our own capital city is the best place to choose! Preply, an American language learning app and e-learning platform recently created a global expat index that ranked 60 of the most popular locations amongst expats. 11 relocation metrics were taken into consideration including the average monthly salary, the safety of a place, the average time required to learn a language fluently, amongst others. 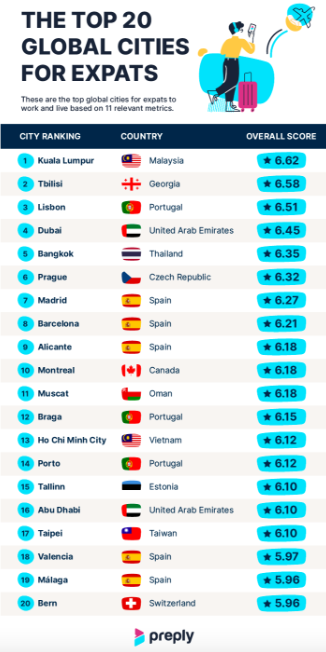 Kuala Lumpur proudly took the crown at no.1 with an overall score of 6.62 with Tbilisi, in Georgia following in at no.2 with 6.58. European cities such as Barcelona placed eighth while our northern neighbours Bangkok ranked fifth on the list. Other Asian cities such as Ho Chi Minh City ranked at no.13 while Taipei was placed at No.17.

We’re certainly proud of what KL has to offer and according to the website, ‘the city boasts over 322 activities such as theme parks, cave tours, and visits to the famous Petronas Twin Towers.’ We definitely have everything from natural attractions, to endless shopping options and heritage buildings.

The website also mentioned that living costs for expats are on the low side at £903 or approximately RM4.7k. Besides that, the average monthly rent for a one-bedroom property located in the city centre is £363 or approximately RM1.9k, which leaves those settling in here as their second home with disposable income to have a fairly comfortable lifestyle.

The pandemic normalised remote working or the ‘work-from-home’ lifestyle, and in KL, the co-working spaces are at an affordable rate of a mere RM393 or so a month, which was the lowest out of the top 20 cities ranked. Unfortunately, we lost out in the internet speed metric as KL’s was amongst the slowest at only 11 Mbps.

While our national language is Malay, English is recognised as a strong second language by our government which makes it easy for foreigners to communicate. Happily, Malay is not a difficult language to learn as English speakers are estimated to take up to 900 hours of lessons to achieve a ‘Professional Working Proficiency’.

Besides that, Malaysians are known for our hospitality and we definitely have amazing cuisine! Remember the American TikTok user who went viral at how amazing KL was too?