Baby For Sale? Woman Accidentally Lists Baby For Sale On Facebook Marketplace Instead Of Her Sofa!

RD Minion
Accidents happen all the time and there’s nothing you can do about. Sometimes the accident becomes something you laugh about for years to come.

In the case of a 20-year-old mother, she didn’t even realise the accident until it’s a little too late.

Lucy Battle from the United Kingdom actually accidentally listed her baby for sale on Facebook Marketplace instead of her sofa! 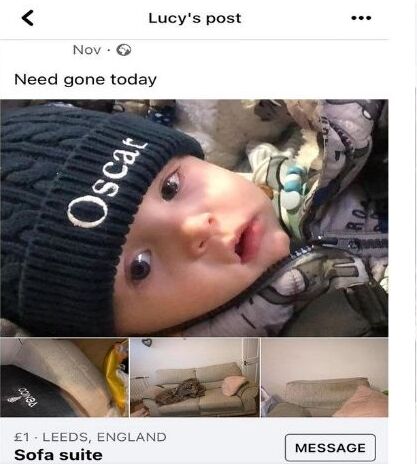 According to a report in Daily Mail, Battle wanted to get rid of her old two-seater sofa as she got herself a new sofa set.

So, she posted photos of the sofa and mistakenly included a photo of her seven-month-old son, Oscar, in her post.

Battle was confused when the post started receiving weird comments.

"How bout a two for one swap? Teenager 14, brother 6, and I will throw in the father for free?" wrote one user.
"What's he like with other babies?" wrote another user.

Battle belatedly realised that the main picture on the post had Oscar in it.

However, she didn’t delete the post as she was too embarrassed to do it.

Guys, always double check your photos before posting them online!